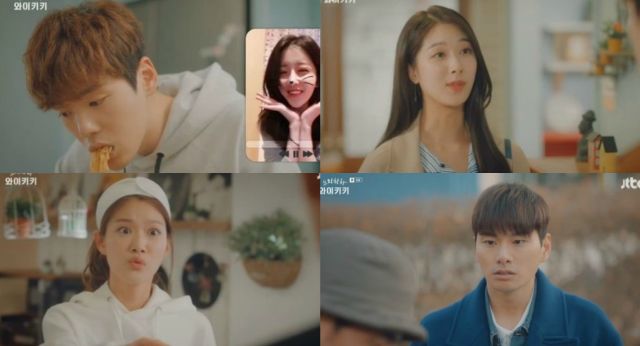 There's one really funny gag this episode - the climax of Joon-ki's mukbang storyline ends with the guest house earning a lot of money. How Joon-ki was able to get success out of such a fundamentally stupid idea, well, that's where the humor comes from. There's also really good synthesis to the joke, because other characters and plotlines are also involved, and one accidental revelation from the broadcast sets up another storyline.

I'm also willing to give decent marks to Seo-jin's adventure in fashion. At first I really didn't get what was going on, but the more people Seo-jin runs into, the more transparently silly the whole gag becomes. It's been awhile since "Laughter in Waikiki" went with purely visual and contextual humor. I really wish the production team would try this more often, because the usual loud stupidity is horribly grating. Jokes do not become funny just because they are louder and stupider.

Case in point- the entire storyline at the racing track. After a certain point every time Joon-ki opened his mouth I really just wanted to slap him. It really is starting to drive me crazy how no one at the guest house has any idea how to manage money. If they had trouble finding jobs, that would be one thing- but they keep throwing what little they have at stupid frivolities. When Dong-goo finally expresses an idea of financial sensibility, it's only in the service of another idiotically pointless lie.

I can't root for characters who are too dumb and dishonest to solve the most basic problems. There's another throwaway line in here about Dong-goo, Joon-ki, and Doo-sik scraping together enough money to film their own movie. That's a great idea! Except that when they are this bad at managing money and communicating basic ideas, how exactly are they going to make a movie? They'd probably just end up exchanging their camera for magic beans- forgetting that even if the magic beans work they have no way to film the scene.