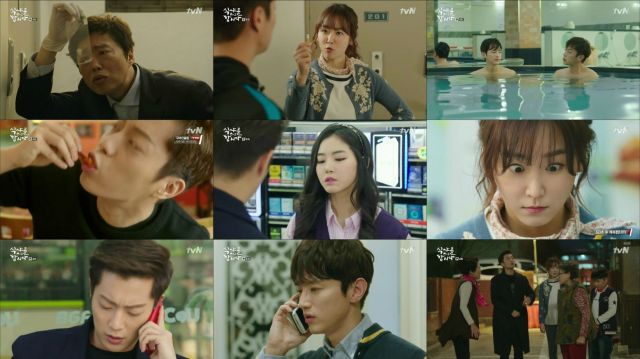 The main interesting thing to happen this episode is that the love triangle is established. Weirdly, the center of this triangle is not Soo-ji, which would make logical sense, but rather...well, nobody in particular because again, it's not clear whether Dae-yeong and Soo-ji are supposed to be getting together or not. Bizarrely, it's the platonic relationship between Dae-yeong and Sang-woo that ends up being the focus. Sang-woo doesn't appear to be gay. But at the very least, he's definitely queer.

Beyond that, there's not a lot to go on. "Let's Eat - Season 2" has settled into a rather peculiar pattern. The odd-numbered episodes move at an extremely brisk pace, establishing a lot of very important information very quickly, and giving the cast plenty of time to appropriately and comedically react to these surprise turnabouts. By contrast, the even-numbered episodes seem to mostly just be filler, expanding subplots that should take ten minutes to resolve into a full hour.

For a sense of perspective, Soo-ji and Sang-woo never really even have a conversation this time. And yet we do get constant exposition regarding Soo-ji's dispute with the landlord, which makes clear beyond a reasonable doubt that something mysterious is happening on the third floor. The episode spends so much time building this idea up that the revelation is inevitably a disappointment, if only because we're going to have to wait until the next episode to get any kind of satisfying explanation.

I blame last episode's preview to some extent. I can see why some of you don't like watching previews- in this case it made me expect something more brisk and comedic and decisive. Instead we're still setting up basic portions of the premise. It's sloppy writing. Sloppy and rude, really, because the jokes here are so radically different from the last episode it practically feels like I'm watching a different drama with the same characters.