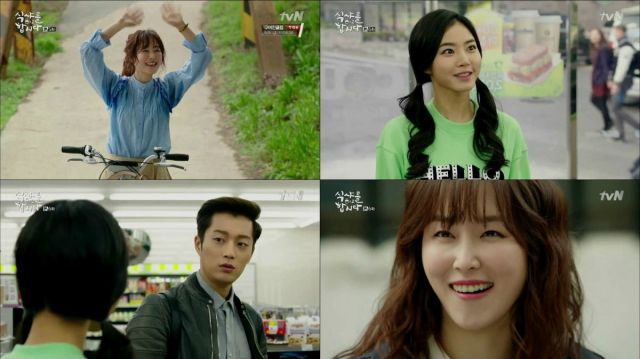 Soo-ji's incremental progress toward a relationship with Sang-woo here is foiled by...rental payments. Good, good, more absurdity. I mean it's not really that absurd. Pretty much everybody has to struggle with the rent, especially in the wake of a dumb impulse purchase. But this isn't the kind of real-life issue that normally shows up in dramas. Fiction tends to focus on concept rather than reality. Yet as "Let's Eat - Season 2" shows here, a lot of mileage can be accomplished just by watching Soo-ji squirm over the rent.

Speaking of writing, I really loved how the episode works in a plot point regarding the fantasy of every single creative writer- that someone we find attractive will read our work and be impressed by it. It's pathetic but oh so true. Which writ-large is one of the more appealing parts of Soo-ji's character. She's obviously consumed with a rather silly romantic fantasy. And yet she remains mostly sympathetic, because I suspect most viewers, like Soo-ji, have indulged in similar fantasies at some point in their lives.

Contrast Dae-young. As usual, every disgusted point he makes regarding Soo-ji's attitude is totally correct. Yet there's a sort of edge to his ideas as later explained that fairly convincingly resolves the question of how he ended up breaking up with Soo-kyeong in the first season. Dae-young might be cool, but he's probably a rather unsatisfying partner in a long-term relationship. While cynicism can be funny, it's not much to build a future on.

Overall everything is going quite well for "Let's Eat - Season 2" right now. The jokes are funny, the characters well-defined, and the conflicts preventable. The production really has nailed the essential element of making the characters easy to relate to, mostly by providing them with a fairly broad set of well-defined opinions. Sang-woo's argument against coquettish romantic activity is actually a fairly persuasive one. Let's see if anyone can prove him wrong.