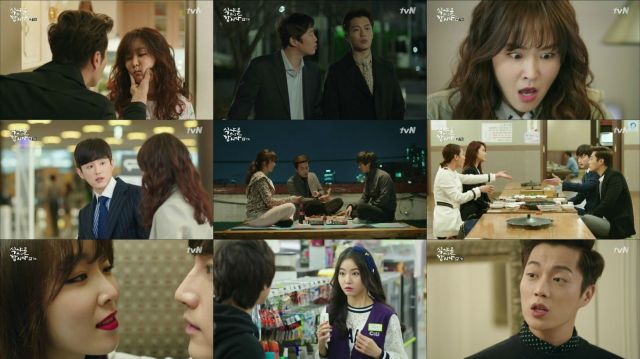 The slow pace of the plot catches up to the characters here. I can't help but find it rather inherently amusing that Dae-yeong and Soo-ji are acting like they have all the time in the world to get her together with Sang-woo, when from the very beginning every single work meeting Soo-ji and Sang-woo have had has referenced the blind date that Sang-woo keeps trying to avoid. Well, that's the problem with romantic fantasies really. They're a lot more fun than actually trying to date.

For what it's worth Soo-ji is a pretty good sport upon finally discovering the bare surface of the secret personality that Sang-woo normally only ever shows to Dae-yeong. Getting him to act like that in front of her is a pretty big victory for Soo-ji, even though as usual the woman insists on trying to be as inoffensive and pleasant as possible, no matter how weird it looks in the context of Sang-woo's favorite word.

The presence of Lee Joo-seung is also being slowly justified. While most of the more essential details of his character are shrouded in mystery, we do discover in short order that he is, in fact, a man- one of the more pathetic types that we've seen running around a lot thus far. To be entirely honest this isn't a terribly impressive justification. His relation to the main characters remains tangential, even if there are usually jokes involved.

And that's what really matter isn't it? The quality of the jokes? The setpieces this time are nothing too elaborate, but I was always reminded of how well all these characters are drawn as people. We know a lot more about Soo-ji and Sang-woo than we did at the beginning of the drama, and the extent to which their personalities remains a mystery is mainly that extent to which they themselves don't really know what they want. Really, their main goal right now seems to be to pester Dae-yeong. And you know, that's a short-term goal I can get behind.