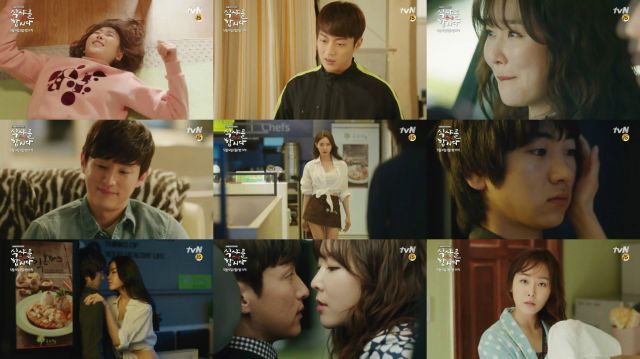 In a mildly genre-bending twist, last episode revealed that Soo-ji's goal of a relationship with Sang-woo was actually much easier to accomplish then was expected. So...what exactly are the characters supposed to do for the remaining ten episodes? It soon becomes clear that from this point on, rather than being about Soo-ji being terrible at romance, we're now going to get a story about Soo-ji and Sang-woo being mutually terrible at romance.

It's like some kind of weird zen question- what do people do on a date when they don't actually know how to date? How exactly did Soo-ji and Sang-woo manage to get to their late twenties / early thirties without ever actually getting wrapped up in these problems before? Well, actually, Soo-ji has spent most of her energy excessively dieting. And Sang-woo has just been acting like a total bro. So this question is easier to resolve than it may seem at first. Fortunately they do at least have the maturity to realize when they might be moving too fast.

Dae-yeong's role in all this has also become increasingly comical- has he ever actually been in a situtation where keeping a relationship secret was an important priority? I'm guessing not. Really, Dae-yeong doesn't seem like the kind of guy who really knows how interpersonal human dynamics work except on the abstract level. At least, that's how I'm choosing to interpret his rather bizarre scene at the grocery store. That does seem like exactly the kind of thing Dae-yeong would do in his off hours.

The other characters, well, they're mostly just there. And I'm all right with that, really. Like any good ensemble piece "Let's Eat - Season 2" knows that sometimes it's best to just have defined personalities in the same room together, maybe to bounce around a little, but not necessarily to get wrapped up in their own plots too heavily. The mystery is still sort of iffy- but whatever's going on up top the roof, we'll find out soon enough.