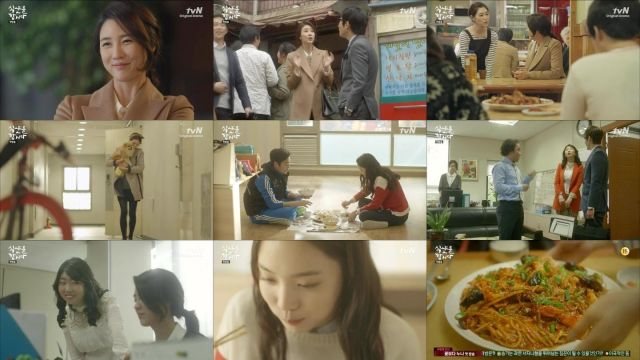 Soo-Kyeong isn't exactly the most sympathetic woman. Her social life is low quality, but the main culprit for it seems to be her own bad attitude, as well as the fact that she clearly likes food more than she does people. Which strangely enough is not something I can hold against her. Her next door neighbors aren't bad people, but there's nothing terribly endearing about them either. Of course, they become fast friends with one another, apparently ignoring their mutual faults, while Soo-Kyeong is just off to the side somewhere chastising her dog.

The food pornography makes for a curious backdrop to this. In terms of sheer emphasis on edible delicacies, "Let's Eat" is very reminiscent of "Fermented Family", right down to the little title cards that explain how to make specific gourmet dishes. But whereas the characters in that drama were motivated primarily by family ties, the characters in "Let's Eat" don't seem to be particularly motivated by much of anything just yet.

Instead, what we have for the moment is character based humor. And some of it can get a little gross. The drama appears to be contrasting the highly idealized vision of the wonders of delicious food with the bodily consequences resulting from such overindulgence. To put it in simpler terms, there is vomit. There are slimy bags of trash. People spend more time lying unconscious on the floor in a pool of their own juices than they do in their actual beds. There's a family in this drama with two young boys and their untidy home is by far the cleanest we see.

I'm not sure what to make of "Let's Eat" just yet. The performances are of a pretty good quality and the jokes, while crude, get the job done in terms of humor. But the only real hook at this point is the mystery of what happened to Soo-Kyeong's former neighbor- and we only get any kind of clue what's going on with that at the very end of the episode, when a rather curious clue is uncovered. It remains to be seen, naturally, whether Soo-Kyeong's motivations are going to have any kind of nobility or will rather just be motivated by antipathy toward her neighbors.