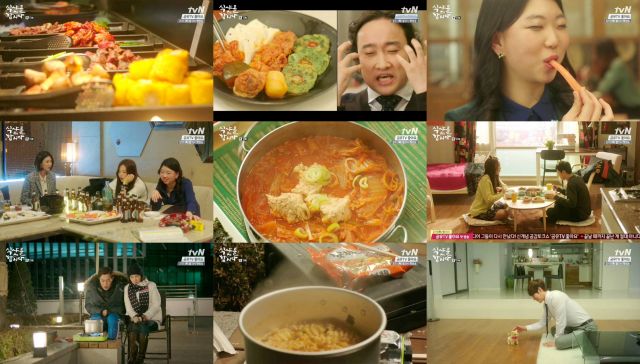 At the beginning of this episode we almost instantaneously get the idea that Soo-kyeong is a changed woman. She's just so bright and happy and cheerful and why is she wearing that ribbon in her hair she's not a child. And this is immediately questioned as being a bad thing. I love the sheer agitation in Soo-kyeong's attitude when the possibility that she's romantically interested in Dae-yeong is brought up.

I also love that the drama actually goes to the trouble of addressing this point, to the extent that Soo-kyeong is worried about what she has become. I know that described abstractly this sounds absurd. Shouldn't any person aspire to be in love? Well no because nothing good has ever come out of Soo-kyeong being in love in the past. She always gets disillusioned and let down. Particularly with her ex-husband, whose face is mysteriously hidden from the camera.

But never mind the problem of Soo-kyeong's love past. How about the present? Well, as it turns out, there are other characters already fully in love with Dae-young. Soo-kyeong looks at the way they act and recoils in horror. Is this really the road she wants to travel? I love how this drama is able to take something as normally straightforward and positive as a love story and give it really sinister overtones. These people look like fools. And sooner or later, they're going to realize that they've been looking like fools this entire time.

Except for Hak-moon. He's still as ineffective a love interest as ever which is just as well. It's hard to imagine that Soo-kyeong would be suspectible to any direct advances right now anyway. Or maybe ever. I'm intrigued by this character arc, really. Where could it possibly be going? It's hard to imagine Hak-moon is going to succeed. But could this really end up being an anti-romantic comedy, giving the message that love is dumb and we should give up on it?

I really have no idea. But the fact that this drama could entertain the possibility of such a narrative direction even for the briefest of moments says volumes on its own. Everything about the production of "Let's Eat" is just so complementary in this regard. Even those brief little flourishes that makes this look more like a traditional storyline only do more to sell the point that Soo-kyeong is fighting against traditional notions of romance and friendship- and to a surprising extent we in the audience are actually hoping she'lll win.