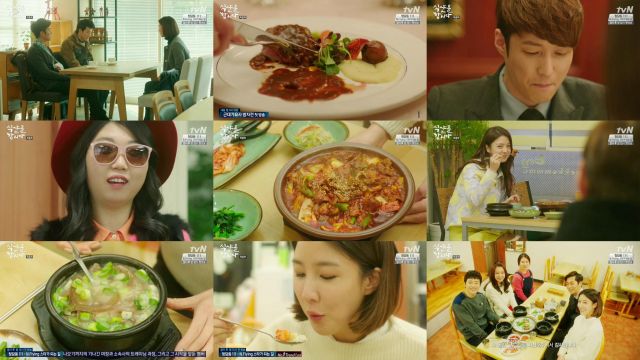 The drama dedicates most of its energy this time to resolving the crisis with Jin-hee- which isn't really that much of a crisis so the seriousness is a bit off-putting. It would seem that for all the hullabaloo about the danger posed, there's not really much here that's terribly interesting. Waiting for this plot point to resolve is rather tiring, even if at this point it's the only thing that could reasonably be called a narrative direction anymore.

Then that's all settled with and "Let's Eat" moves in to what has to be the most extended epilogue I've ever seen. This is good- the drama has always been about life in the moment so any abrupt ending would beg the question of whether any of these relationships are going to last. Remarkably enough, in the epilogue, the characters are at about the exact same place I'd expect them to be even in a more traditional sudden ending- so that much is mission accomplished.

Don't worry- there's still jokes. We never did solve the mystery of why Dae-yeong's trophy had dried blood on it. That mystery is solved here, with the man's usual sense of aplomb. Actually, if there's any word to describe the humor here, it's definitely aplomb- from every character now rather than just Dae-yeong. We don't have that sense of false bravado anymore, or the desire from everyone to deliberately manipulate each other. Most of the characters seem to have grown out of this behavior and are behaving, well, like adults.

And all of this ties back to the food. The final ending sequence puts this quite well- but to put it abridged here, it is through the process of eating, that natural process we all have to do, that people can connect. Yes, even those of us in the modern world where there's all so much complicated random stuff to worry about. Whatever happens we'll always have that sense of intimacy that's implied from the process of having to eat together.

It's a remarkably Korean message, actually, that goes a lot into the culture's general attitude toward food as a whole. This makes for a very subtle social element that I'm not sure could be well replicated were this drama to be remade in another country. Although goodness knows it would be nice if someone were to try. The production of "Let's Eat" has been utterly suffused with subtle characterization that disguises itself with extreme quirks. There's a self-awareness of the production that comes off as refreshingly honest, and that carries through to the ending, even if technically this is probably one of the weaker episodes. But for the drama as a whole? Great stuff, and highly recommended.