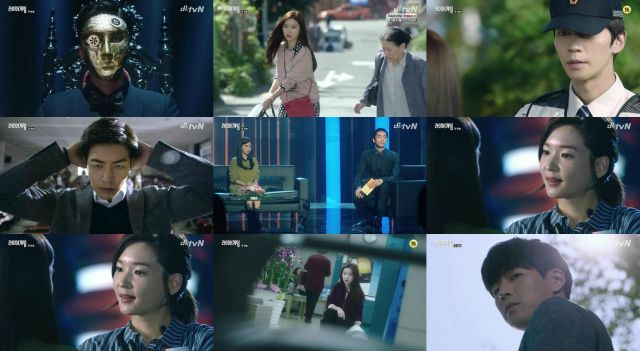 Woo-jin (played by Lee Sang-yoon) appears to live by a creed of general paranoia. Da-jeong (played by Kim So-eun) is mostly kind and trusting, although she's not an idiot. These two get together to...well, we don't actually get to that part. The actual team-up isn't going to happen until next episode, and the relationship between these two characters isn't really established at all. So far the drama has dedicated most of its energy to presenting itself as a very curious riddle.

It is, for what it's worth, a fairly effective riddle. After Woo-jin's initial speech it's pretty obvious that Da-jeong has gotten embroiled in some sort of scam. What's not immediately clear is what possible purpose this scam could serve. When it's finally revealed that all of the story is at the behest of a modern variety show called "Liar Game"...well, it really just begs more questions than answers. Most immediately it's just, what exactly are the producers of this program trying to prove?

Certainly, at the very least there's this notion that no one can be trusted- especially mostly casual acquaintances. In terms of selling Woo-jin's point of view the drama definitely has some success. The simple reality is that a person doesn't become more trustworthy just because we've had some brief, fleeting professional contact with them. The moral point of "Liar Game", consequently, appears to be that anyone would be more than willing to sell off their ethics and reputation provided the stakes are high enough.

The lack of actual action this episode does a lot to undermine this, though. The entire opening with Da-jeong is great stuff that does a lot to establish the mystery of the game. Then we get to a lot of long-winded explanation of the game that's sort of dull, then we get to Da-jeong's first opponent, and the lack of a real confrontation is terribly frustrating here. A drama needs more than mere discussion of moral issues to reach any kind of profundity- it needs to be backed up by action, too.

In a weird twist of irony, "Liar Game" the drama has the same basic existential issue as "Liar Game" the show-within-a-show. I enjoy mysteries with a meta-twist, but right now the drama's only giving us the promise of a hook. Hopefully once Woo-jin and Da-jeong actually team up the pace will get a lot more brisk. The format is best primed for sequential encounters and showdowns with various other liars, and now that the premise is set up, there's no excuse for the drama to dawdle on other less interesting topics.