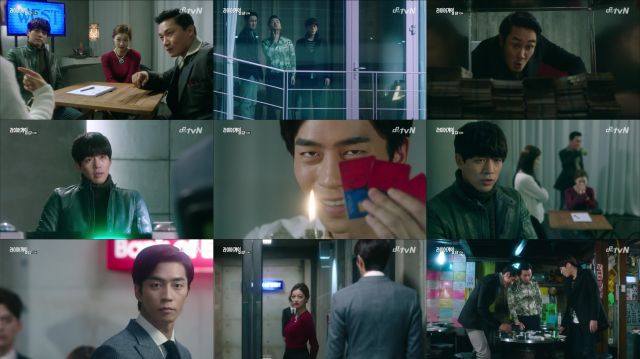 You've probably figured out the writing pattern by now- after the major cliffhanger, Woo-jin reveals how he identified the plan of his rivals and how he managed to pull off a countermove to expose the truth behind the situation. And in fact, his deduction makes perfect sense. In fact, it's so obvious I feel kind of dumb for not noticing it myself. "Liar Game" has done such a good job showing off the apparent superhuman abilities of its characters that it's easy to forget how, at the end of the day, they are just normal people.

The ultimate plan to regain victory is a bit more shaky, though, because it just goes right back into the mind games that the drama has been detailing this entire time. For what it's worth, the thought process is simple enough to understand. I suspect that's probably part of the problem. While the last episode was a high point in terms of making the game easy to understand but difficult to predict, this time the situation is so transparent that it's hard to get any kind of serious dramatic tension out of it.

"Liar Game" is certainly trying in the aftermath at least. The situation kind of gets a little crazy. I was expecting revelations, but not what happened in the elevator. The abrupt change in tone brings up some questions that the drama hasn't really done the best job addressing. What is the "Liar Game" anyway? Aside from the rather cruel treatment of the losers, is there really anything about the concept that's particularly inherently evil?

The only way I can think of to satisfactorily answer this question is that Woo-jin really does have more of an agenda than he's letting on. His connection to Do-yeong may well be even more personal than what we've been led on to believe. That would certainly put his relationship with Da-jeong in an awkward place. Maybe he hasn't been lying and has, for that matter, been completely straightforward with her every step of the way. But that's the only way I can think of for the last round to pull up meaningfully high stakes is to seriously cast doubt on the trust level of their relationship.

Then again, considering the way this episode resolved, with the most blatant display of Da-jeong's power of trust and loyalty yet, even that might not be enough. The quality level of "Liar Game" has remained consistent enough that I'm still willing to give it a chance going to the end. Average episodes can lead to spectacular finales easily enough. Nonetheless, my hopes remain just moderate.