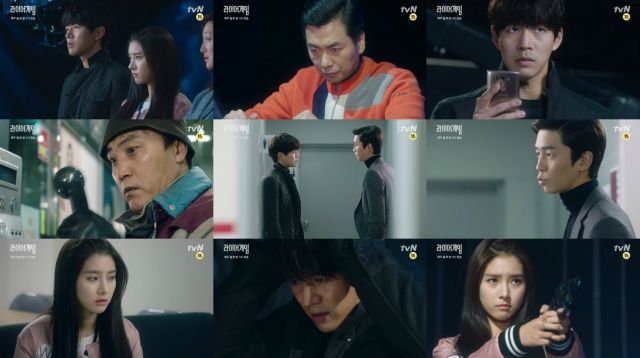 The good news is that all the games this time around are fairly easy to understand. The bad news is they're so easy to understand that "Liar Game" really has to contrive the situation in order to plausibly get Do-yeong to come out ahead. He's not really succeeding based on the power of his bluffs so much as he is by apparently understanding the structure of the game and the way the odds are defined much better than any other character. It's somewhat plausible, but it does tend to make our main characters look like chumps.

More troublesome is the fact that none of this really relates all that well to anything the drama has been doing thematically so far. The final essential revelations are about mysterious events in Woo-jin and Do-yeong's past. And to be entirely honest, I don't really see the point to any of this. Do-yeong works as an eccentric and possibly crazy game show host. When the main strengths of "Liar Game" are based on the fun factor, is it really necessary to try and be serious about any of that?

Woo-jin, likewise, has functioned so well in the general mysterious capacity that actually learning more about him kind of takes away a lot of his charm. By making personal character motivation the main plot thread, "Liar Game" has also managed to minimize the threat of crippling debt that was such an effective scare point earlier in the drama's run. Maybe it's just because people my generation are all miserably stuck in debt, but I honestly found that threat a lot more intimidating than all this visceral physical stuff.

It's also clear, at this late date, that the only characters we're really going to get a good look at at all in terms of characterization are Woo-jin and Do-yeong. Other characters are just relying on previously established personality traits in order to function. This works out all right with Da-jeong and Dal-goo, but everyone else is practically a non-entity. Weirdly, I think we actually know more about Jamie's fake persona from episode three than we do about the real Jamie.

Unfortunately, "Liar Game" has pretty clearly set these up as the relevant stakes for the final episode, so this is probably all we're getting going in to the end, too. I can't think of any satisfying ending here. It's not a matter of writing, but tone. Anything too serious will make the game show end feel ridiculous, and anything too silly will make the mysterious past end feel really weird. Well, at least the music is pretty cool. While "Liar Game" has had its ups and downs the soundtrack remains a strong point.