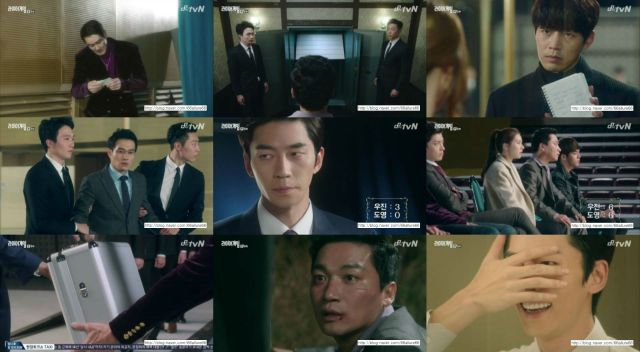 After Woo-jin has revealed his gambit for making victory not so impossible after all, a twist pops up that threatens a reasonably interesting political allegory. What happens if you take power only to discover that the situation is not what it seems? This idea is mostly scuttled, though, because the main group immediately sets up a council to figure out what happened. Such are the advantages of a team that operates under a genuine assumption of trust.

If your favorite part of "Liar Game" is the convoluted rule manipulation, this episode delivers all you could possibly want on that front. Whereas most of the rounds so far have just been build-up coupled with a relatively simple blot of betrayal at a critical moment, this episode is just an endless stream of characters trying to get at the truth without letting anybody else know that they're on to them.

It's the kind of writing that really requires a flowchart to keep track of everything. Sometimes this can be fun, but for me at least, it just served to make this episode a very tiring one. I know this puts me in an ironic position, given that it's my whole job to think about dramas, but this time "Liar Game" really just goes too far. The lack of reprieve or relief in any form here requires almost complete concentration. The drama is being very demanding right now mentally, and I just wasn't in the mood for it.

Visual flair, again, could have gone a long way to helping "Liar Game" maintain a sense of spectacle. But it's mostly just verbal warfare. Even the elaborate looking podium is very barren and lonely in actual execution. It's difficult to put much interest behind anything the candidates are actually saying when everyone's mental calculations appear to be based on abstract game theory manipulation anyway.

Genuinely interesting and new material doesn't really show up at all until right near the end, when we start seeing some evidence and context for the manipulation. Most significantly, we get a very clear hint as to what Do-yeong's true motivation is. This kind of big picture stuff is the kind of context "Liar Game" really needs to be engaging on a level besides the immediately convoluted one- hopefully the next round will have more of this, given that outside of Do-yeong, there's no one left that really seems to be all that credible a villain.