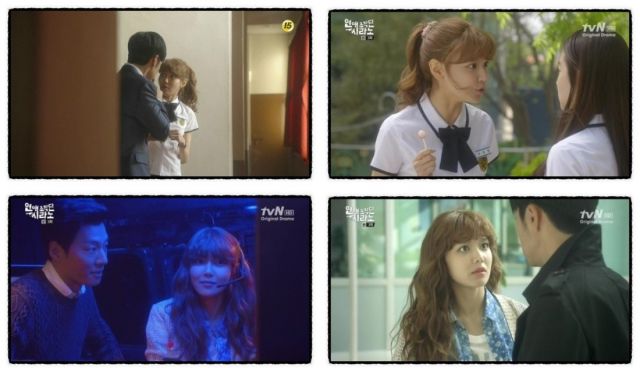 The episode starts out with some clever grounding- funny how, with just the slightest emphasis of focus, character actions that seemed to indicate one emotion were actually about something else. The high school arc continues to surprise me with just how on-point it is. For all the zany antics of school uniforms, idols, and too-smart kids, it's painfully obvious that none of the teenagers have any idea what any of the rest of them are thinking. The main "attractive" element of each individual member of the love triangle is an aura of mystery which doesn't actually exist.

The Cyrano Agency members also get some interesting grounding. We find out that Byeong-Hoon is basing a lot of his strategy for this love manipulation on his own experiences in high school with his first love- all of which, coincidentally enough, happened at this same school. Implausible? Perhaps- but it sets up an intriguing interlocking theme with the ongoing love manipulation, as certain parts of the case become just a bit too personal.

This is difficult enough given the way the situation keeps entangling itself in further snarls. The adult love manipulations we saw earlier, while convoluted, were still marked by a certain conservatism. They needed the Cyrano Agency to deal largely with their own shyness. These teenagers, by contrast, are brash and keep acting on their own initiative, inevitably messing things up even more by limiting the reactive options of the Cyrano Agency.

Consequently, it seems unlikely that we're leaving the school grounds anytime soon. I would not have expected the story to linger here- even by the standards given so far, there's something a bit demeaning about watching adults maximize their dramatic chops by acting in and around a high school. But there's so much good material here I can't really complain. I especially love the building of dramatic lighting- it figures that such a place would happen to exist by sheer dumb luck.

Even though this episode by and large is just set-up for further plot developments (many of which don't seem likely to arrive for some time), there's a warmth, energy, and inquisitiveness that makes these glimpses quite fun. When Min-yeong starts snooping around for information on what her "older brother" was like when he was in hgih school, we're right there with her, and it doesn't feel like an irrelevant distraction even though in terms of the actual love manipulation that's exactly what this subplot is is. Overall, that just makes it all the more impressive that the delivery is so effective.