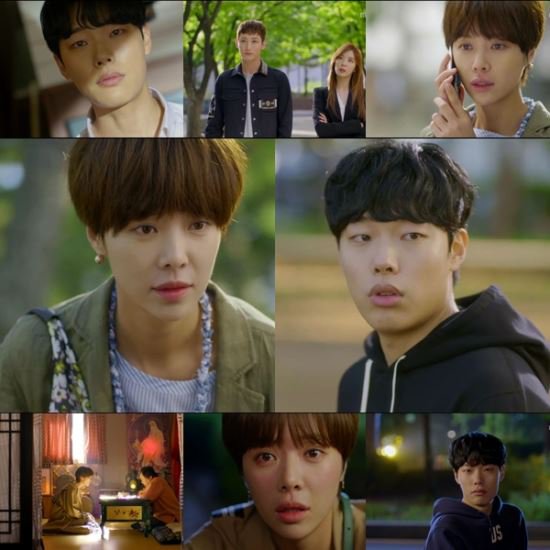 Bonnie (played by Hwang Jung-eum) tries to survive in a generally brutal world by relying on sheer grit to force people into giving her what she's owed, and begging for work that utilizes her somewhat eclectic skill set. These experiences keep causing Bonnie to run into Soo-ho (played by Ryu Jun-yeol), an obsessively scientific man with his own past traumas. Ironically enough, mechanical processes themselves often fail Soo-ho at the worst possible moments, aggravating his mental issues.

"Lucky Romance" is, at first glance, strikingly generic. The elaborate coincidences required to get Bonnie and Soo-ho in the same area smack of contrived plotting. But there is a thematic excuse for this. Bonnie has a strong interest in astrology and fortune-telling. This means that conceivably, the connections between Bonnie and Soo-ho are intended to serve as a harbinger of destiny.

Bear in mind "Lucky Romance" doesn't really explore these ideas very directly since the first episode is too highly focused on background. After several generic setpieces we finally get into Bonnie's backstory, and while this gloomy material does provide a fairly decent explanation for Bonnie's philosophy toward life, there's oddly little urgency. There's plenty of high-stakes events that inspire pity for the lead characters, yet I found myself feeling surprisingly empty after these scenes.

Visually speaking the drama is quite strong. Bonnie's standard outfit is excellent- it has a nice star motif without being overbearing, marking her as traditional yet eccentric. I suspect what's galling me is that Hwang Jung-eum is portraying Bonnie more generically than seems appropriate given what we know about the character. I mean, she spends a significant portion of this episode wearing a bunny suit for rather il-defined reasons, yet treats the experience as little more than a trifling inconvenience.

It's possible the problem is with the direction, but again, director Kim Kyeong-hee-II is quite good when it comes to the visual elements. The sight gags are extremely well done, and the scientific motif of Soo-ho's office bears the exact same sense of subtlely shown in Bonnie's costume. His science vision is also neat. I haven't read the webtoon on which "Lucky Romance" is based, but the drama does evoke a lot of the same feelings a good webtoon should in terms of visual communication. The problem is a drama needs to communicate with performances just as much as it does with backdrop, and I'm still not feeling that aspect yet.