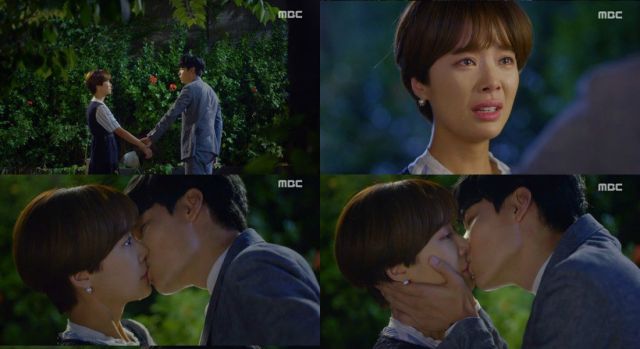 One advantage of slow pacing is that when characters finally act dynamically to move the plot forward, it comes off as a genuine surprise. I was about as bewildered as Bonnie when apropos of nothing a love confession pops up, and had as little idea about what the proper response should be. Granted, her weirdly uncommunicative stance immediately afterwards was a little annoying, although Bonnie is so bad about communication in general that this isn't exactly a new character trait.

By and large, though, this episode takes place from Soo-ho's point of view. And for once Ryu Jun-yeol's one man show is fairly appropriate, because of course everyone has had that experience- waiting in increased panic for a clear response while superficially acting like we don't care. Soo-ho is pretending to be an attractive person, which is pretty inherently funny considering the episode started out with Bonnie explicitly stating which personality traits he has that she likes, and none of them were at all standoffish.

Which makes sense when we consider Soo-ho's past experience. While Soo-ho's lack of experience is the main obvious culprit, I'm more inclined to point the finger at Seol-hee. Where Bonnie acts nice yet fails to verbalize, Seol-hee is constantly giving Soo-ho verbal false hope while privately still planning to leave the country on her previously decided timetable. I don't think Seol-hee is doing this out of maliciousness- she just hasn't caught on to the fact that her ideas of acceptable behavior are completely incompatible with Soo-ho's.

While the romantic material is fairly strong, the main characters' other plot points remain fairly weak. The production team isn't even pretending to care about the video game development anymore, and my eyes glaze over pretty much any time parental issues are discussed. Although this may be more a relative problem. "Oh Hae-Young Again" is so good at dealing with parental issues anything else is going to come off as substandard by comparison.

The secondary characters do pretty well, though. Lee Cho-hee is disproportionately adorable compared to her character's actual importance in the story. I like how Dal-nim jumps from being in complete freak-out mode to being romantically lovey-dovey at the drop of a hat. Once Dal-nim loses control of one emotion, it's like the others sense an opportunity and start dogpiling. What keeps this from getting annoying is that the main character to bear the brunt of this inconvenience is Ryang-ha, who's just barely unlikable enough to deserve it.