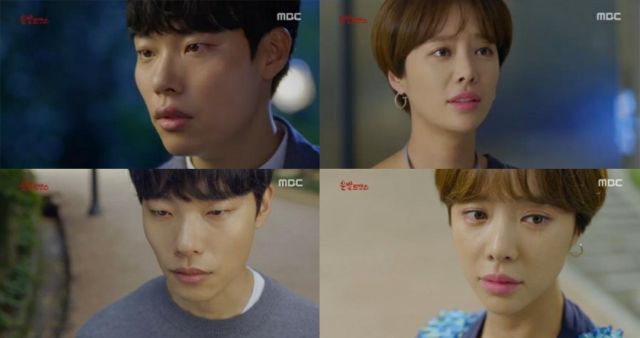 So after that huge climactic kiss last episode Bonnie...is still looking for excuses to avoid the plot. Agh! Already I miss "Oh Hae-Young Again", with its characters always making a mutual effort to keep their romance alive. Bonnie is practically the living personification of all the reasons Soo-ho has to not like dating, because she insists on making everything so hard for reasons she won't explain. Bonnie is long overdue for a discussion with Goo-sin, since the shaman is pretty much the only character who can make Bonnie explain herself.

Bonnie's behavior makes me uncomfortable because she's practically forcing the male leads to stalk her, that being the only way to move the story forward. I feel bad for Geon-wook especially, because Bonnie's coy attitude has the effect of making it genuinely ambiguous what he should be doing right now. Admittedly, if I had a talking refrigerator I'd probably look for excuses to use it all the time too.

Outside the product placement "Lucky Romance" has other distinctive visual elements. There's the whole "line dividing the house into two halves" sitcom gag that up until now I've only seen used in parodies, not as an actual plot. And there's also the red string of fate, which is a pretty patently bizarre visual image considering how Bonnie keeps resisting Soo-ho. Surely she's aware of the symbolic significance of connecting herself to Soo-ho with a red string?

The humor in "Lucky Romance" is not all that bad, once these factors are taken into account, since strange visuals can dovetail pretty well with comedy. The best sequence is when Soo-ho panics over the possibility that another character will see his wall chart. An honorable mention goes to Ryang-ha and his confetti. But I am going be very upset if he actually succeeds in altering Dal-nim's appearance and ruining her goofy charm.

Because that's the main thing "Lucky Romance" has going for it- goofy charm. The erratic pacing makes it difficult to engage with the story, which is too predictable to benefit from extended runtime. Even if we end up getting a curveball in regards to the obvious twist regarding Soo-ho's parentage, there's not going to be much of an impact because Soo-ho's relationship to his parents is only tangentially related to his more interesting character traits. Really, Soo-ho's inability to care much about anything except his job and Bonnie is one of his more amusing quirks, and "Lucky Romance" does well when it focuses on that.