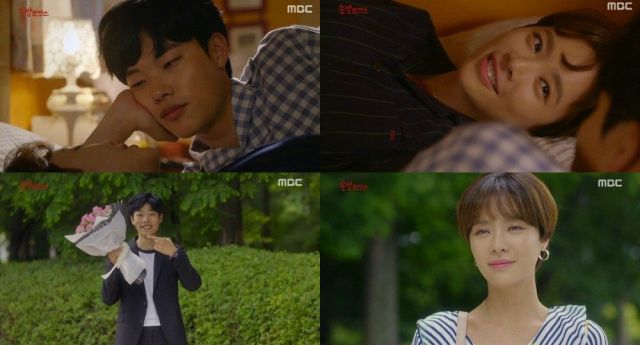 Soo-ho takes his rather alarming reversal of career fortune in casual stride this episode, being fully determined to play the role of cheerful boyfriend through all possible negative circumstance. Ryu Jun-yeol really is quite good in this role. Soo-ho is simultaneously enough of an adult to be the leader of his own company, yet socially immature enough to think tossing everything aside for the sake of love is romantic rather than foolhardy. Soo-ho has always been a real person, rather than the caricature of adult virgins that is more common when they show up on television at all.

In reaction to this, Hwang Jung-eum finally gets some good material to work with. Bonnie is obsessed with bad luck and superstition which, for most of the drama's run, has felt completely grounded in fantasy. But we can see that with all the bad stuff happening to Soo-ho, Bonnie's worries come off as somewhat justified. However tangential the relationship may have been, Bonnie's actions did eventually result in the company being attacked.

But Bonnie can't actually talk to Soo-ho about any of these fears because he thinks it's overreaction and Bonnie doubts she can convince him otherwise. That's legitimately good dramatic tension in an episode that is for the most part very cute and pleasant. We like watching Soo-ho being the insistent persistent boyfriend while the bigger realities of the situation creep behind uncomfortably. It's a good approximation for how Bonnie feels.

Elsewhere the supporting cast struggles. Geon-wook and Seol-hee have become confidantes for characters with better defined storylines mostly because there isn't anything else for them to do anymore. I'm still baffled that after minimum exposition, Geon-wook's father just popped up out of nowhere and the heartfelt reunion finished before we had any time to react to it. Seol-hee is in an even more awkward position, having somehow managed to lose her second lead status to Dal-nim.

Although critically speaking, the most ire has to be reserved for the ridiculous cliffhanger. I've seen speeding cars come out of some pretty ridiculous places in Korean dramas, but this is the first time I can recall an accident happening in front of a police station of all places. Writing like that does, however unintentionally, sell the idea that Bonnie is the constant victim of a cruel merciless writer God who requires constant supplication lest He decides to ruin her life with some form of improbable disaster.