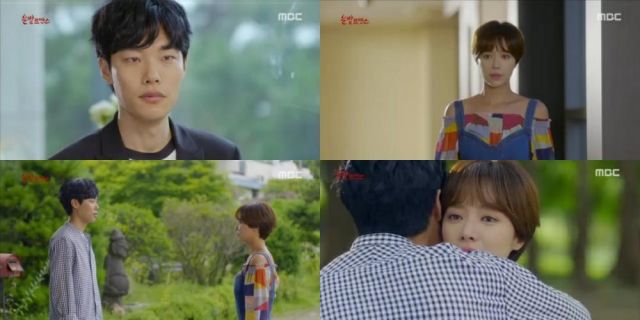 The big issue with this scripting is that by design it inhibits interaction between Soo-ho and Bonnie, when their interplay is by far the drama's most interesting dynamic. Were I to chart episodes by what percentage of the time Soo-ho and Bonnie are on-screen together, the best episodes would quite surely be the ones with the high percentage. Whether they're fighting or being cute is rather besides the point. Ryu Jun-yeol and Hwang Jung-eum know how to do romantic comedy.

Their chops at romantic drama are less than impressive, although that may be more a problem with the direction. It's hard to pin-point any single weakness of "Lucky Romance" because there are a lot of them. The main factor preventing the drama from being terrible is the generally boring nature of the plot, such that the script is so disinterested in its own story that it will frequently forget major plot points barely an episode after they're introduced.

That's what's really been missing in "Lucky Romance"- a sense of depth to character relationships except when the actors are good enough to transcend that. The Dal-nim/Jang-hwa romance has had about as much exposition as any of the other random plotlines, yet it is substantially more memorable because these characters are portrayed with genuinely interesting passion. Why couldn't the entire drama have just been about that kind of interplay?