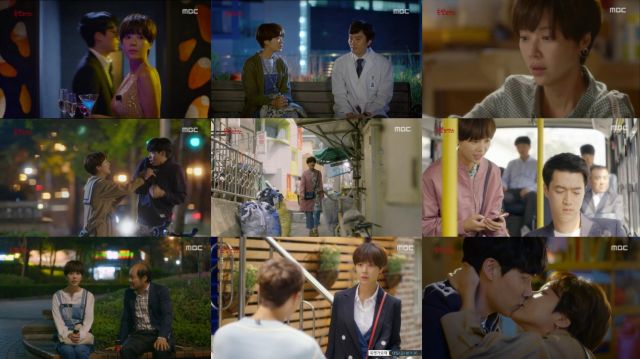 Now that the premise has been firmly established, it's easier to get a grip on Bonnie's character. She's very observant when it comes to spiritual matters- note the pantheon of holy images from radically different faiths. Yet when it comes to anything else in life Bonnie is aggressively unobservant to the point of being totally oblivious. Take pro tennis player Geon-wook (played by Lee Soo-hyuk). Most women would at least be a little curious as to why Lee Soo-hyuk is making faces at them but Bonnie is always in such a hurry to do nothing.

Bonnie's vocational problems are an even better example. It becomes clear this episode that Bonnie is an exceptionally skilled computer programmer who could probably easily get a professional position if she would only stand still long enough for a potential employer to talk to her. While Bonnie is overflowing with energy, she directs it so incredibly inefficiently that it's little wonder the poor woman has to spend so much time struggling with menial work and consulting astrological charts.

And now, on top of all her other problems, Bonnie must have sex with a virgin born in the Year of the Tiger (1974, 1986, 1998). This is a very bizarre and random requirement. Although really, can any of us seriously claim that our standards are any less arbitrary? It's almost a kind of feminist commentary, how for all her more serious problems Bonnie also has to find a man to have sex with because patriarchy the shaman told her to.

Then again, the script would also be a fair way to put it. The plot in "Lucky Romance" has a very generic feel, occasional strange dramatic flourish notwithstanding. Which I suppose isn't really a bad thing. It's much harder for a straightforward plot to leave the rails and go somewhere idiotic. To date most of the more absurd plot movements are a direct consequence of Bonnie's eccentric personality, so it's all basic action-reaction with mostly logical consequences.

That much does tend to overshadow the other characters though. Soo-ho's main distinguishing personality traits this time are notable mainly in the sense they resemble Bonnie's- both get overnight workaholic montages. I'd like to see comparisons drawn from other directions- like Soo-ho's employee and Bonnie's friend Dal-nim (played by Lee Cho-hee). She's the only character who really knows both of them, which has all sorts of potential for insight. Also I love her eyewear. That's my virgin tiger- a real life woman who wears those huge glasses.