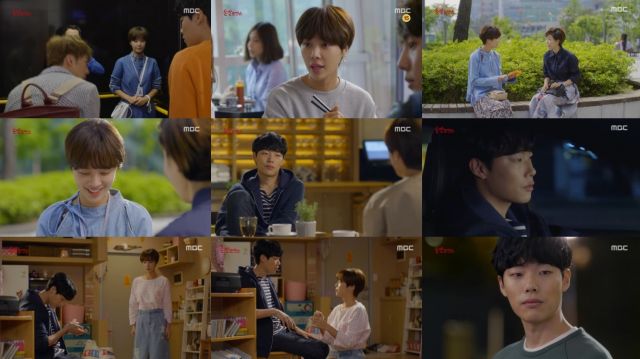 Seol-hee (played by Lee Chung-ah) is Geon-wook's manager and Soo-ho's ex...love interest. Yes, normally "girlfriend" is the word that would be used here, and it comes as little surprise that other characters assume that's what's going on when Seol-hee and Soo-ho meet on very stiff, awkward terms. I must admit, Seol-hee's character is a lot more interesting now that we know she had her own subversive motive for temporarily coming back to Korea, and it backfired because now it looks like Geon-wook doesn't want to leave.

But that's not the only place where the plot in "Lucky Romance" has kickstarted. Now that Bonnie has finally figured out what her goal is, she too must awkwardly confront Soo-ho in an attempt to get him to have sex with her. Bonnie constantly has to stop just short of clearly explaining why she wants to meet up with Soo-ho so badly, because of course he'll think she's a crazy person.

Not that Soo-ho himself is very sensibly minded. His personality gets some badly needed weirdness, as we see how Soo-ho turns everything into a kind of bizarre mathematical contract for maximized efficiency. In between a ridiculously intensive work schedule and an apparent lack of interest in women in the first place, it's easy to see why Soo-ho is a virgin and more relevantly, why this does not seem likely to change in the immediate future.

The concept behind "Lucky Romance" is probably its single strongest point. Any time the actors have to engage with it, they end up reacting in a unique specialized way befitting the eccentric personalities of their characters. But they're not eccentric in the wacky sense. Both Bonnie and Soo-ho are strange in that their lives are governed by rather kooky beliefs that only really become obvious when they try to make plans together. To date, though, Bonnie is the only one to realize just how strange she seems to other people.

Yet there's also heart. Bonnie is a legitimately good-hearted person, and multiple scenes here make her easy to sympathize with. While here a sick sister in the hospital comes off as trite writing, a quick response to another person's emotionally difficult situation feels much more genuine. Although goofy writing is still an issue. I have no idea what to make of that flashback to college life in the United States. That scene was pretty clearly not intended to be funny, yet it's laughable on almost every possible level.