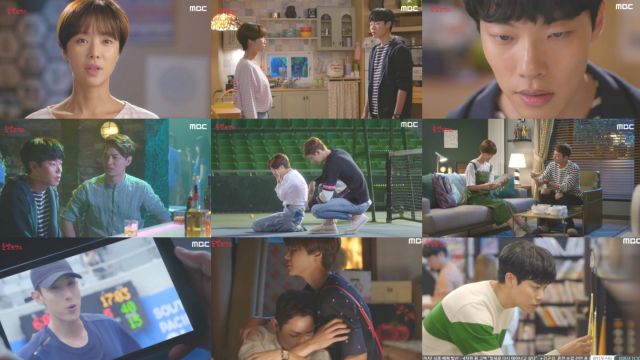 The main issue in "Lucky Romance" is a lack of chemistry. This isn't the fault of the performers. Hwang Jung-eum and Ryu Jun-yeol get along with each other well enough, it's just that they don't have as much screen time together as would be expected from the lead characters of a romantic comedy. To the contrary- they spend more time mentally scrutinizing each other than they do actually talking to each other.

This creative choice by the production team is a puzzling one. It beggars disbelief than in a matter of weeks Bonnie and Soo-ho are going to overcome this awkward tension about guessing each other's true motives and become a genuine romantic couple. Given the hard deadlines both Bonnie and Soo-ho are working with in regards to sick sister / new game project it's difficult to imagine that "Lucky Romance" is going to last any longer than either of those two conflicts.

Elsewhere the pacing manages to be too fast. Remember Geon-wook's issues regarding his birth father, and how that influenced his return to Korea? That conflict is finished. Not progressed, just straight up finished. Considering how this was Geon-wook's main interesting character trait aside from simply being a spoiler love interest, I'm not at all sure how he's going to be integrated into the story from here on out. Yes, he is modeling for the game, but presumably that can be accomplished from TV footage without Geon-wook's direct involvement.

Well, I guess there are those heartfelt chats with Bonnie. Which for me is probably the biggest highlight in "Lucky Romance", because they're not even all that romantic. It's just, hey girl, you've had a tough day, let's unwind. Geon-wook is a really good friend. After "Sensible Love" and "Scholar Who Walks the Night" I'm rather pleased to see Lee Soo-hyuk in a role where he can act generally happy and healthy emotionally, even when it comes to tears.

"Lucky Romance" is not by any means a bad drama, it just suffers from a very questionable sense of pacing that tends to dilute most of the production's strengths. It almost feels like writer Choi Yoon-gyo is stalling for time because he can't think of a plausible reason for Soo-ho to cooperate with Bonnie's request without just ending the drama's conflict immediately. That's really not a problem which should exist with a story that's adapted from a preexisting work, though, so I'm not sure what's going on in the background.