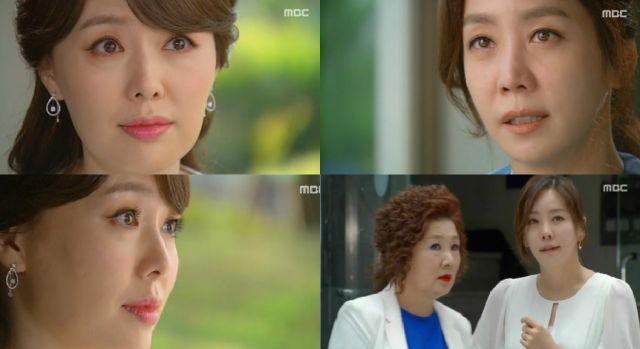 Eun-soo has this really bad habit of using a threatening tone of voice even when she's not actually trying to act threatening. The weird part is that it quickly becomes clear that Eun-soo doesn't actually know anything about what's going on with Jin-woo. She just seems to be gossiping with Deok-in for no apparent reason, except to try and hurt Deok-in emotionally. So that character, at least, remains mostly unsympathetic.

Deok-in's mother has a better episode though. Initially I wasn't sure what to make of her friendship with Bok-rye, but I realized this episode that Bok-rye doesn't actually have any friends. Just children. This is a very important point- Bok-rye can engage in dramatics like attempting suicide because there aren't any peers around to tell her this is a bad idea. Deok-in's mother can provide a sense of perspective on why that's a bad idea- imperfect though the younger woman's advice may be.

And "Make a Woman Cry" definitely does a lot to remind us of that. The inter-family meeting predictably goes poorly precisely because of Deok-in's mother. In all fairness the situation wasn't entirely her fault, or even Eun-soo's. Hong-ran of all people picks a fight by deliberately asking rude questions. The awkward part of this is that while the questions are rude, they're actually good questions. Who is Deok-in's father anyway?

Actually, the better question would be why Deok-in herself hasn't asked this question. But the answer to that is sadly all too obvious. Deok-in has seen enough of her mother to realize that this isn't a question that could possibly have a good answer. Deok-in's mother consistently makes everything more awkward and more unpleasant- and the fact that Hong-ran is indisputably being the real jerk here doesn't change that.

While Jin-woo has come off poorly lately, exchanges like this very nearly present a compelling argument that keeping secrets might be the best course of action. It's not that Deok-in's mother should be ashamed so much as it is there's not really any apparent benefit to getting her to open up about these issues. If Jin-woo were to tell Deok-in what he knows about the accident, would that in any way ameliorate the situation, or accomplish anything except making Deok-in feel even more like garbage? Besides the point, the rich family isn't the real problem here anyway. Hyeon-seo is the one who's one bad day away from ruining everything, and we haven't even seen him much at all lately.