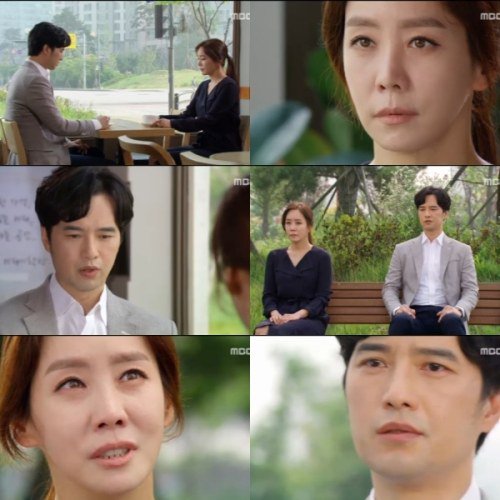 The conflict takes on the fairly traditional trappings of money versus remorse this episode. To some extent I think Deok-in is bein unfair to Tae-hwan. Obviously it's a somewhat insulting gesture to try to make up for the death of someone's son by giving them money, but what else is Tae-hwan supposed to do? The guy's not exactly overflowing with fatherly warmth and affection. Expressing sympathy through financial gifts is probably the best way Tae-hwan knows how to articulate himself.

I was able to maintain this generally sympathetic reading for awhile, and then we get to the flashback. And that's just, well, geez. I knew that the exact background of that scene must have been horrible and soul-crushing but did we really need to see it? The answer is of course yes, because this is what's been floating around in Deok-in's mind ever since she discovered the rich family's role in her son's death. With that in mind, how else could she interpret the financial issue except as an insult?

In that vein it should come as little surprise that Deok-in is better able to put her mind at ease by continuing to act nice to that guy who sells fish cakes in front of her store. His story becomes much more relevant this episode- which is fortunate, because up until now every time I see him I just think two things. That people don't normally sell fish cakes during summer. And also that's an fairly good price- normally they're three for a dollar. Maybe these are small ones.

These events have definite potential to impact Eun-soo negatively- but at this point "Make a Woman Cry" has so thoroughly eviscerated her character it's difficult to feel even the slightest bit of pity. Tae-hwan really pretty much nails it- Eun-soo has a very lousy attitude. She's spiteful and mean for the sake of being spiteful and mean. Tae-hwan might not be the best when it comes to meaningful emotional gestures but even he can tell that much.

One slightly building problem at this point is that the sheer extent of dramatic coincidences is starting to collapse the drama's broader plausibility. The rich family storyline was always kind of goofy, and it doesn't really come off as any more plausible here coming right on the heels of Deok-in's major emotional confrontations. The serious financial discussion is also a big part of that- I think Deok-in's mom makes a good point too about how refusing the money doesn't accomplish all that much. That's her life experience speaking, as someone who's constantly lacked much financial security.