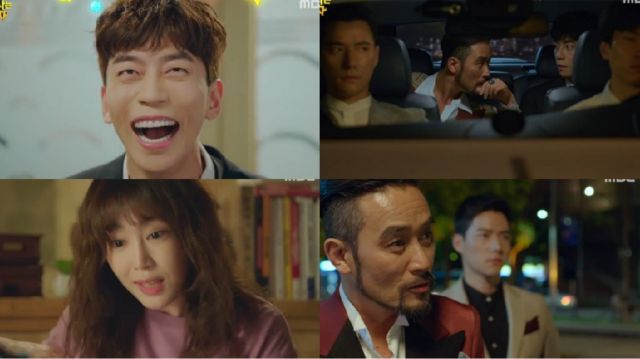 The other Ji-yeong (played by Lee So-yeon) is, at present, the most likely suspect for Count Said Faid Ali's daughter, although this is based on limited information. Count Said Faid Ali's information is filtered through Abdullah Mohammad Waliwala (played by Cho Tae-kwan), and we've been getting hints that he is not to be trusted. It's just that Count Said Faid Ali is too eccentric to notice. Observe his bizarrely complicated plan for eventually meeting his daughter that in the short term just involves spending a lot of time with Ho-rim.

I rather like Ho-rim. I mean, not literally, the guy's a real dork, but he's a perfect foil to all of the other characters. Ho-rim is just barely unsympathetic enough that I don't mind his being jerked around by Count Said Faid Ali. Ho-rim is being greedy. He's bitten off way more than he can chew, yet is completely wowed by Count Said Faid Ali's haplessly throwing money around. Ho-rim is heading toward a bleak comeuppance, and he's going to deserve everything he gets.

Count Said Faid Ali's lunatic eccentricities, obviously intended as they are for comedic fodder, are also the main clue we have for guessing which Ji-yeong is his daughter, since neither of them looks like him. And to that extent at present ambiguity is maintained. The other Ji-yeong has the evidence, yet the wife Ji-yeong has Count Said Faid Ali's goofy personal style- which naturally comes off rather differently, considering he's a billionaire and she's a frustrated housewife.

Consider how Ho-rim is constantly flustered by her sub-par husband, and how this presses her interests elsewhere. The whole sexy walk scene was a thing of beauty, especially when we finally see why Ji-yeong got all prettily made up and slinky. Ji-yeong is a genuinely adorable super nerd who needs moments of feeling awesome to make up for all those awful moments during the day when she feels like garbage because no one appreciates her.

The other Ji-yeong also has self-worth issues, and they form an interesting parallel. The other Ji-yeong has the professional success the wife Ji-yeong craves, yet is emotionally unsatisfied and angry emotionally in a way that makes the wife Ji-yeong look pretty mentally healthy. It's easy to see how lacking a father figure has affected both of them fairly negatively. Just look at how they're both attracted to Ho-rim, of all men, who doesn't deserve either of them.