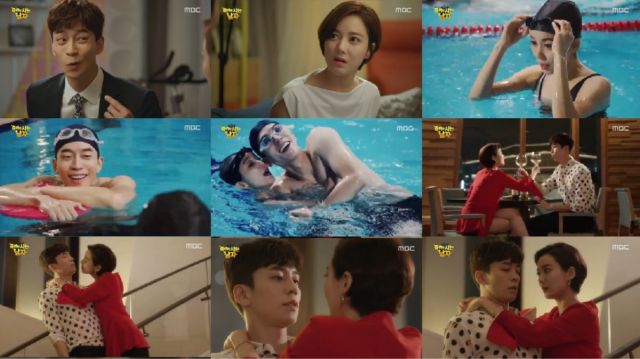 We get some much needed "awww" here as the married Ji-yeong and Ho-rim get a cute moment together. Because I mean really, "Man Who Dies to Live" skirts dangerously close to having us straight up root for their divorce. It's comforting to know that Ho-rim does, indeed, have some positive qualities. It's just a shame that in his greedy quest for money and power Ho-rim must tell increasingly bizarre and elaborate lies in order to guarantee Count Said Faid Ali's continued interest in the bank.

How much Count Said Faid Ali even cares about his money is actually surprisingly unclear. He just seems to toss it around at random. Cartoonish figure that Count Said Faid Ali is, it's hard not to see the obvious satirical undertones. The South Korean characters, like South Korean society in general, are obsessed with financial success in a way that's not terribly healthy. But Count Said Faid Ali, who was not in South Korea when this cultural shift happened, has a profligate attitude toward that astounds everyone he runs into.

That, and the constant womanizing, which is mostly just habit. I like the implication that while Count Said Faid Ali loves making passes at attractive women, it's not clear that he wants or expects these encounters to last more than a moment. Count Said Faid Ali is obsessed with looking and acting super cool, and it doesn't matter to him if anyone else believes it just so long as he can plausibly believe it.

Whereas the other Ji-yeong, with her emphasis on being stylish, is much more externally focused. She can't open up about her real emotions at all to anyone, which is why the cliffhanger to episode six is so jarring. Yes, it's easy to instead focus on Count Said Faid Ali's obviously inappropriate responses, but that's why these two are such a mismatch. Count Said Faid Ali never thought through what he would actually do upon meeting his daughter. Whereas the other Ji-yeong has obviously rehearsed this scene in her head far more times than she is willing to admit.