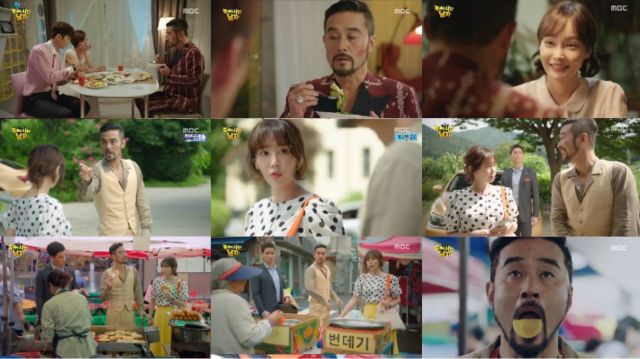 Right away a brief soliloquy makes it clear that yes, Count Said Faid Ali is suspicious about the other Ji-yeong although as is to be expected, his reasoning takes the form of an obscure fairy tale rather than real world standards. Which works, oddly enough. We already know that the other Ji-yeong isn't really motivated by money anyway, so it's not like trying to suss the situation out logically would be of much use.

The way "Man Who Dies to Live" is able to to come up with reasonable character motivations from entirely emotional situations is quite impressive. Usually when characters starts thinking overly emotionally, that's the part where they start to feel artificial and unreal. But the eccentric behavior works in "Man Who Dies to Live" because the entire overriding situation is so inherently strange that mere spontaneous character reaction is quite convincing.

The central personalities being well-telegraphed and clearly defined helps quite a lot with this- kudos to the cast on that. Shin Sung-rok transitions effortlessly between being genuinely sincere and sweet and then being insanely frustrating as a man who cannot effectively communicate to save his life. Ho-rim struggles between giving up on his obviously impossible goal and continuing with it simply because everyone except his wife keeps egging him on.

Observe how Count Said Faid Ali blows away a great deal of his precious time in Korea by just hanging out with the married Ji-yeong, a woman he only knows from an extremely embarrassing drunken encounter. Ji-yeong's instincts are entirely random from Count Said Faid Ali's point of view, yet she quickly grasps a point that has alluded the other Ji-yeong, Ho-rim, and even Abdullah Mohammad Waliwala. Count Said Faid Ali's entire conception of Korean culture comes from a very different place than the usual socialites he hangs out with normally. Count Said Faid Ali is a man badly in need of a nostalgia trip.