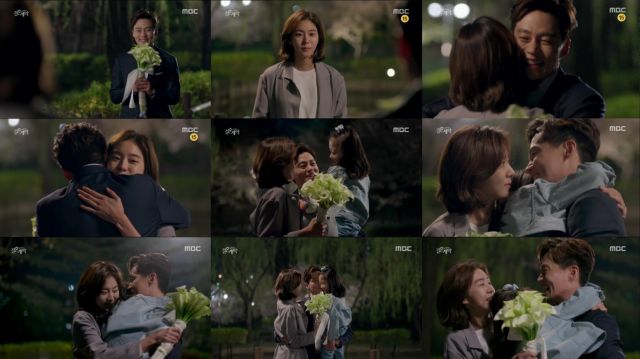 Ji-hoon has been beset by small annoyances for most of "Marriage Contract"'s run. In the early stages Hye-soo and Eun-seong were a major part of these annoyances, but they at least meant well. Now, with a better understanding of the warmth of Hye-soo's spirit, Ji-hoon has finally asked himself whether it's worth dealing with a family that puts such disproportionate effort into trying to cut each other down. From there, the story is a question of how, no matter the diagnosis, for the moment Ji-hoon would rather spend every possible moment with Hye-soo and Eun-seong.

Life as Ji-hoon and Hye-soo know it is about to end, and they've accepted that. Normally this would result in morbidity and hand-wringing, yet strangely enough the tone of this episode is more cheerful than most of what we've seen in "Marriage Contract" so far. Accepting inevitability here means accepting that stressing out over factors that won't change is simply pointless. Life is to be enjoyed. That's all there is to it.

As usual Lee Seo-jin and UEE are the best part of "Marriage Contract", delivering some powerful chaste chemistry that comes off much more meaningfully than something more traditionally sexy. Take the opening scene, where Ji-hoon and Hye-soo are in bed together. Initially the presentation is titillating, yet straightaway we see that Ji-hoon is mainly just relieved to see that Hye-soo has survived the night.

Elsewhere, the plot remains awkward and undeveloped. Jeong-hoon's unnecessary re-introduction of the loan shark into the story is put to an end mostly because Seong-gook shows up and gets mad at Jeong-hoon for having such a stupid idea. Jeong-hoon is difficult to take serious as a villain because he's so bad at it, and the reason Jeong-hoon is so bad at being a villain is because he just lashes out impulsively. The lack of premeditation simply underscores how Jeong-hoon is a pathetic, heartbroken man.

I remain irritated that Na-yoon is treated sympathetically by comparison. Even if her little speech about love is correct, if Ji-hoon was the kind of man who would tolerate a woman abusing his brother to get at him, he would not be the kind of man described in Na-yoon's speech. The subplots in "Marriage Contract" falter mainly because they haven't been given proper time to develop, and if there was proper time to develop, we would have been better served with more complex interesting side stories instead. Given the production situation, that much can't be helped.