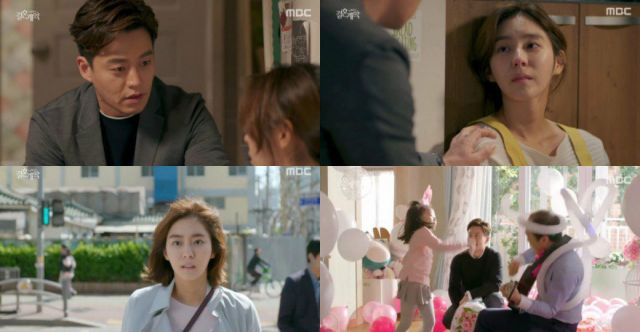 There's this real magnetic quality we get from Lee Seo-jin and UEE. No matter how bad the situation gets, no matter how obvious it is that this story will have a tragic ending, as long as Ji-hoon and Hye-soo are together, they will not give up. "Marriage Contract" is their story of sheer determination. It hits all the harder because we've seen Ji-hoon and Hye-soo alone and know that absent positive reenforcement they struggle to achieve the simplest tasks.

I frequently see "Marriage Contract" less as a story about romance and more about the power of a supportive family as a stabilizing influence. Compare the Ji-hoon/Hye-soo relationship with the paternal one between Seong-gook and Jeong-hoon. Seong-gook patronizes and belittles his son without offering any kind of pathway to genuine affection. I continue to just feel sorry for Jeong-hoon, even if someone finally sticks up for him this episode.

Most of the one-on-one emotional scenes here are quite strong. Another good case is Ji-hoon's conversation with Mi-ran, where he has to explain his unreasonable desire not give up on Hye-soo. It's just the way Lee Seo-jin breaks down and cracks, fully admitting his own powerlessness and begging for some kind of encouragement, any kind of encouragement, because that's what he needs right now- support. Those feelings are easy to identify with because pretty much everyone has had moments where we need someone, anyone, to tell us to brave the emotional hazard and charge on full speed ahead.

Eun-seong's interruptions, though, are also quite welcome. Eun-seong is useful as a character because she demonstrates how Ji-hoon's affection for Hye-soo is not skin deep. Whereas a boilerplate bad stepdad figure would be annoyed at kids butting in and ruining romance, for Ji-hoon, Eun-seong is an essential part of the whole package. She's a responsibility. Ji-hoon can be the dad to her that he's always wanted, rather than the Seong-gook who exists now.

It's the overwhelming strength of sentiment that really powers "Marriage Contract" through. The drama identifies so strongly with the basic despair in the human condition that, as usual, I can forgive some of the more annoying tropes. Take the way the final sequence counts down to ultimate tragedy, while the actual cliffhanger leaves us frustratingly ill-informed as to what exactly has just happened. That's how you leave a viewer desperately impatient for the final episode- genuinely unsure whether the victor will be hope, or the standard melodramatic format.