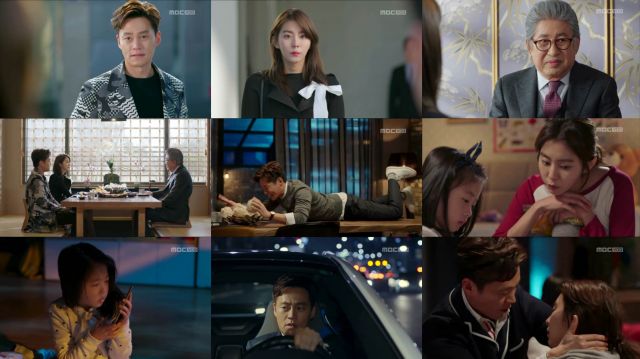 Hye-soo isn't really anywhere near actually doing the transplant surgery yet and she's already constantly getting exposed. This is an aspect of the pacing in "Marriage Contract" I rather appreciate. I was expecting the surgery would be rushed and the drama would be about everything after that. Instead it looks like we're in the opposite situation- the tension is based on whether or not the liver transplant surgery will happen at all. Which makes sense, because doctors try not to rush this kind of thing if it can be avoided.

Everyone else, though, has good reason to be impatient. We're left in doubt as to how much Seong-gook knows when it comes to Ji-hoon and Hye-soo's fraudulent arrangement. All that's fully confirmed is that Ji-hoon is clearly Seong-gook's favored son, although we don't know why. Perhaps it's because Ji-hoon defers to handling his own problems without dragging daddy into it. Jeong-hoon comes off as more annoying.

Although really, I feel bad for Jeong-hoon. Yes the guy's a little aggressive and something of a jerk. But now that he's figured out Na-yoon was just using him as an excuse to get at Ji-hoon, well, of course he's mad. Doesn't he have a right to be? In an ideal situation Jeong-hoon could talk to his family but the rich family here is legitimately miserable and that's just sad in ways that are difficult to quantify. They don't even know what they want.

Ji-hoon manages to come surprisingly close to happiness, though. Hye-soo in proper eligible bachelorette mode kind of looks like she's going to a funeral, yet she's appropriately stiff and proper while still managing to show off some vibrant energy. I liked the story behind the ad lib she gives to Seong-gook because it's also a hint about her own past dreams. While Hye-soo's current dreams are comparatively modest, this is a woman who knows what she wants in life.

Ji-hoon warms up quite well with Eun-seong too, for many of the same reasons. Eun-seong's desires in life are very simple, and a lot of them can be fulfilled simply by having a father figure. It's not like Ji-hoon has any more important errand anyway. Right up to the cliffhanger, it's easy to see that for all his faults, Ji-hoon can be provoked into doing the right thing if that's what the situation calls for. Let's hope Hye-soo can warrant his continued passion in a way that a more flawed, self-centered woman like Na-yoon was unable to.