[HanCinema's Drama Review] "Marry Him If You Dare" Episode 5 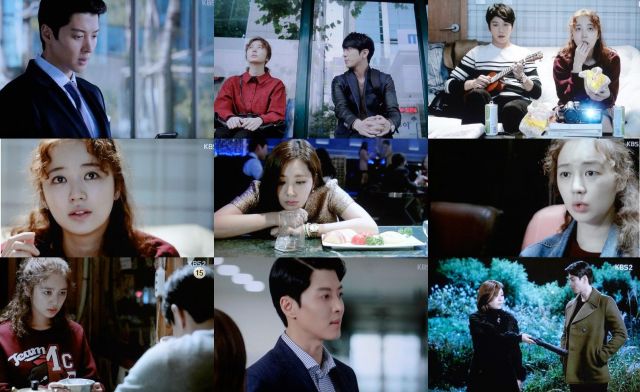 At the beginning of this episode the elder Mi-Rae gives a shocking revelation that clearly threatens to change the dynamic of the entire series. Unfortunately, it isn't until the end of the episode that anyone's actually able to confirm what's going on. So this time around "Marry Him If You Dare" centers mainly around filler- until this plot thread is resolved, the main characters simply aren't in much of a position to decisively move the story forward.

We do get to see some interesting relationship dynamics. Future Mi-Rae gets into an altercation with Mi-Ran, the elder executive at the news organization, played by Go Doo-shim. For some reason it hadn't occurred to me that these two characters could interact with each other, mostly because they have no reason to, but their similar bossy temperaments make for a nice clash. And now that Mi-Ran is aware of the future Mi-Rae's existence, we're sure to get more of these throwdowns in the future.

The main immediate issue of the episode is the present Mi-Rae directly having to make a choice between Kim Sin and Se-Joo. This is ultimately resolved in classic "choose the third option" fashion. And while this compromise is completely in form with Mi-Rae's character, it's pretty obvious that in practical terms this amounts to just choosing Kim Sin since, as we see once more, Mi-Rae has much better chemistry with Kim Sin than she does with Se-Joo.

Interestingly, it's not that Mi-Rae's chemistry with Se-Joo is bad. It's just the comparison between the couples that makes it seem substandard. If the present Mi-Rae was actually making an effort to deliberately avoid Kim Sin a romance with Se-Joo might be plausible. But having him in the picture at all throws a giant wrench in the future Mi-Rae's plans, because she probably knows all about these romantic developments and how impossible they are to ignore once they get moving.

Lastly, we get to see Yoo-Kyeong this episode outside of the context of the rest of the main cast. And I have to admit this scene makes it easy to understand why she chooses to do the sexpot thing. It's not even a choice I can hold against her, given the way the cameraman is enabling her. All of this is moderately interesting stuff- unfortunately its relationship to the main storyline is tertiary as, again, we are just biding time waiting for the future Mi-Rae's prediction to come true. Hopefully the next episode will have a bit more dazzle to it, since the cliffhanger this time ends with this plot point decisively confirmed.

"[HanCinema's Drama Review] "Marry Him If You Dare" Episode 5"
by HanCinema is licensed under a Creative Commons Attribution-Share Alike 3.0 Unported License.