[HanCinema's Drama Review] "Marry Him If You Dare" Episode 7 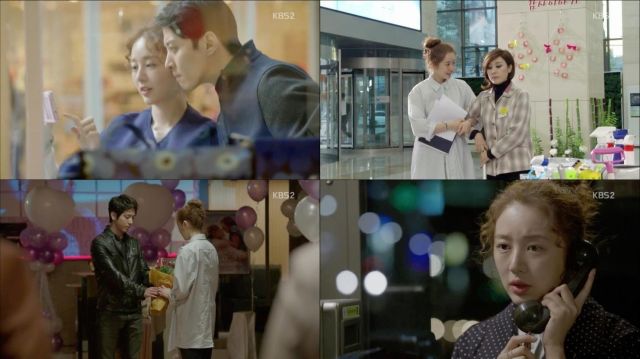 The emphasis shifts straight back to the love triangle this episode- unfortunately it's not really a quadrangle, at least not yet. There's been no hint of any romantic interplay between Kim Sin and Yoo-Kyeong for some time- which is disappointing, since that would seem to be a fairly important part of future Mi-Rae's plan. There is, at least, a hint of this being acknowledged here, as future Mi-Rae tries to work behind the scene to get her past self in line.

The present Mi-Rae is not being particularly cooperative. She still insists on seeing Kim Sin, even though this goes completely against the plan. Granted, Mi-Rae does try to offer some weak justifications as to why it's all right for her to keep meeting up with the man- but they're not terribly convincing ones. At best they make Mi-Rae look shallow and mean for basically leading Kim Sin on.

Although Se-Joo isn't really in that much better a position. Actually, I have to admit that this episode he comes off as a little creepy. Fancy lunches and surprise parties may sound great in romantic comedy theory, and may even come off as cute if this Mi-Rae and Se-Joo had decent chemistry. But they don't. She constantly disappoints him here. If future Mi-Rae had any idea how much she'd be furious- the present version of Mi-Rae could probably have sealed up her ideal future this episode if she didn't keep chasing after Kim Sin.

All this material is interesting and serves to further the storyline, but in terms of subjective quality this wasn't the best episode. It drags on a bit in these points, and doesn't really do enough with potential humor. There's actually a great bit at the beginning where a big dilemma comes up about who's supposed to sit where at an after-party- it's a scene so completely loaded with subtext that it just looks bizarre to a viewer who has no idea what's going on with the convoluted romantic hijinx.

It's an obvious, immediate sense of relevancy that I wish this drama would get more into. The execution of the storyline is solid and really lends itself well to these kinds of moments that are both genuinely funny jokes and interesting statements on the story direction as a whole. Hopefully the next episode does a bit more to shake these dynamics up though- present Mi-Rae's waffling attitude toward the two men in her life is getting a bit tiring, and she needs to be challenged on the hypocrisy of it all a lot more directly than what we've seen so far.

"[HanCinema's Drama Review] "Marry Him If You Dare" Episode 7"
by HanCinema is licensed under a Creative Commons Attribution-Share Alike 3.0 Unported License.