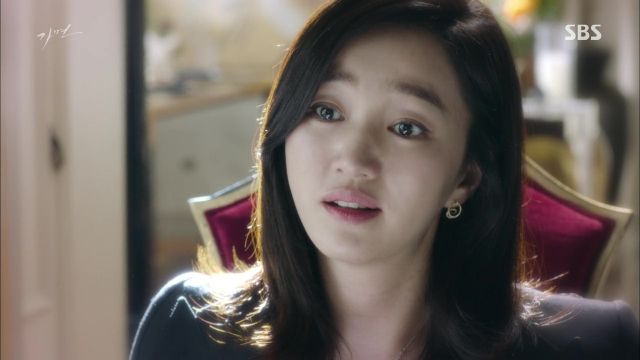 The second episode of "Mask" is nothing short of melodramatic. This isn't a bad thing. In fact, it brings the events from the first episode full circle and propels the plot forward at breakneck speed. All the trappings of a self-respecting melodrama are present and they are, if not novel, at least interesting. This could be due to stellar acting on the parts of the three leads: Soo Ae, Ju Ji-hoon, Yeon Jung-hoon, and Yoo In-young.

In particular, Yeon's acting stands out because he is better known for his brooding heroes than for his scheming villains. It's refreshing to take the same intensity that made him a powerful "Vampire Prosecutor" and transform it into something nefarious. His character, Min Seok-hoon, is an ambitious man who take the Machiavellian approach to achieve his ends. He is also in love with Eun-ha, but not so much so that he forgets his endgoal. It's a delicate balance he struggles to keep and that makes him a dynamic character.

Seok-hoon's love, Eun-ha, is selfish and arrogant with a touch of sadness behind the eyes that can be attributed Soo Ae's skilled portrayal. Where Soo Ae is best utilized is the character Ji-sook, a stereotypically spunky impoverished woman. She is no damsel in distress despite the trials life puts her through. This will equip her for the role change she will experience once she takes on Eun-ha's status and persona.

It is Min-woo who is the most expansive character. He is seriously disabled by his mental condition, which seems to stem from the trauma of losing his mother. It's probably perpetuated by his no-nonsense father and the family that is less like family and more like vultures floating over a kill. Amongst them he tries to overcome his psychosis, which is so intense that it physically causes him harm: he gets into a car accident because of a delusion.

Each person in "Mask" has a backstory to overcome or an agenda to execute. Each main character has a richness in them that will hopefully remain rich rather than morphing into something convoluted as melodramas tend to do.