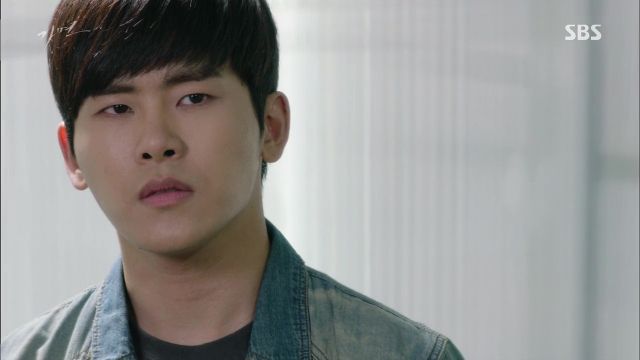 There was a lot of development in episode 6 of "Mask". It was all for the better. We got to see inside the hearts of many of the characters and that shaped all the elements that had the potential to be overly dramatic into effective plot moments.

The most important aspect of the episode was that we got to see past the veils of many of the characters. Behind Mi-yeon's cruel and viperous exterior is a woman who cares for her family and her husband, but is boxed in by social battles and a deceptive husband. Both sides of her come to play as toys with Ji-sook like a cat would a mouse, and she drinks her sorrows away over the strain in their home and over the fact that her husband doesn't love her. And like Mi-yeon, her half-brother Min-woo is trapped by his social status. We learn that he didn't always live with his father. It was only after his mother's death that he joined his father, his step-mother, and his half-sister.

Most importantly, we learned the truth because he opened up to Ji-sook. The couple grows closer by sheer proximity and emotional need. Both lack support systems. Both miss loved ones. Both are truly kind-hearted people in a world of cruelty. What is great about them is that despite their kindliness they still make horrible decisions and they are still majorly flawed. Min-woo's neuroses are used to develop his character as well as some excellent comedy fodder. The writer never forgets that the mental illness is there. His frustrations are released as emotional outbursts or small bouts of physical violence. Ji-sook has gumption, but fear tamps it down and makes her Seok-hoon's pawn.

As a pawn, she hurts her brother, Ji-hyuk, by lying to him. Her relationship with her brother might be my favorite. They've only interacted once since her "death", but we can see how much they care for each other. Ji-hyuk may love her, but his desperation to protect his family after her supposed death leads him down a darker path. Infinite's Lee Ho-won plays him without restraint and gives him a hard edge that is perfect for the brother who is a wild card. I hope his character continues to undergo development as he spirals further out-of-control. His journey and his relationship with his sister carry the bulk of this episode, not the romance, which I find effective.

Not to say that the relationship between Min-woo and Ji-sook didn't receive its fair share of screen time. Min-woo fights his feelings for her and goes through the growing pains of learning what it's like to fall in love. Ji-sook suffers from the intense blackmail of Seok-hoon. He always has his hands around her throat, whether literally or figuratively. That weight depresses her and worries Min-woo. The light in her is growing dimmer, but her strong personality lies in wait. A few moments proved that and redeemed her character from the intense moping she did. There is quite a bit of melodrama in this melodrama, but the small moments are what saves the show from itself. When Ji-sook loses her wedding ring and searches for it because she knows Min-woo gave it to her sincerely, that was a great moment. It took only a line of dialogue and a smile to tether her to Min-woo even more tightly. That smile came from the true, unmasked Ji-sook, and that is the part of her that consistently draws Min-woo closer.

Neighborhood villain Seok-hoon had little to do but be a bully in this episode, but that is okay because he received a lot of development earlier. I do eventually want to see more behind his mask of cruelty, but we have time yet for that. Currently we are dealing with the newly married couple being caught in the web of Mi-yeon's plans. Let us turn to episode 7 to see the outcome.