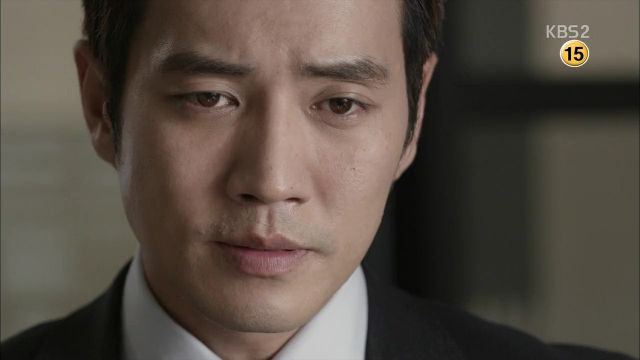 This is an episode of choices and realization that centers around Dae-cheol. The character arcs move in relation to his personal journey, which is lazy writing or perhaps desperate writing as we head into the final week of "Masked Prosecutor".

Dae-cheol is heart broken several times in this episode as his living family continue to disappoint him . His brother has crossed over to the dark side and his mother repeatedly uses him and abandons him. Fortunately for Dae-cheol, her emotional manipulations no longer work to sway him; they hurt, but they don't sway. The pain incites Dae-cheol to indulge in some schadenfreude when he sees Hyun-woong and their mother suffering from the results of their lies and deceptions, much like Hyun-woong. But more than that small reflection of similarity between the brothers, this episode showcases the power of choice. Dae-cheol had initially been on a mission of revenge, but he now seeks justice. Hyun-woong had a choice to follow a different path than his deceptive parents, but he chose to mimic them according to his perverted sense of family and destiny.

Hyun-woong is a character whose trajectory doesn't fit his development onscreen. Had the show wanted him to turn sour, it should've shown him with the qualities that would've brought him to that point: indecisive, dependent on his family and their wealth. These were shown in minutiae, but it wasn't made clear. Now he's a hardened villain and his transformation into that villain was unpleasant and shocking, which could be a good thing, but it's not.

Anything to do with Min-hee has been botched. Her trauma from her birth and her strained relationship with Sang-taek have been seemingly benched. Very little mention of it has been made save for her sweet relationship with her younger sister. Also, she discovers that Dae-cheol is the masked man and we don't get to see the process or the realization. We only get a speech that was so anticlimactic that it made me wonder if I had missed a scene. When she calls Dae-cheol's name while he's masked it stirred no emotional responses. That realization should've had a marked emotional impact on the viewer. It was decidedly anticlimactic. I felt nothing save for disappointment.

Dae-cheol is the only person making any sort of logical, emotionally powerful strides. He has chosen to seek justice rather than revenge for his father, and for himself. Ri-na is just a character who bolsters Dae-cheol or provides an opponent to Min-hee. I had really wanted to see her become her own person rather than a plot tool.

For the last week I anticipate Hyun-woong's conclusion and perhaps Dae-cheol finding peace with his family situation. I'm not as confident about Min-hee's storyline. But we shall see.