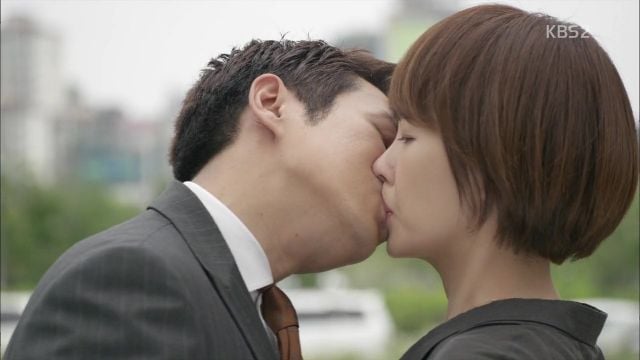 Everything in the action of episode 15 tells us that exciting things are afoot. There are trials, brothers at odds, secret identities uncovered, and romantic antics. A lot happens and yet very little is felt. It's action devoid of emotion. Action for action's sake. Action to attempt to salvage the drama.

The acting on the part of Uhm Ki-joon and Joo Sang-wook is stellar. They infuse each moment with emotion. Unfortunately for "Masked Prosecutor", their fine work isn't enough to pick it up off the ground. Eom has completely embraced Hyun-woong's hardened personality and refusal to admit fault. It puts him at odds with his half-brother who feels no end to his twinges of conscience. The juxtaposition between them is effective in performance, but the build up to their rivalry results in such a stale fight that it would be worth fast forwarding through it. Not only did Hyun-woong's trial make me feel like sleeping, but it was so poorly planned on the procedural side that it made very little sense.

What good came of the trial was that Dae-cheol stopped hiding and took courage to do the right thing: come forward and help Min-hee and seek justice. He admits to feeling pained by his actions. He put his brother behind bars and made his unmotherly mother sad. His mother and brother, on the other hand, are selfish characters. I was hoping for a more powerful driving force behind their horrible choices in life - but those too felt anti-climactic. The pressure on Hyun-woong from his parents was never keenly felt. His mother's greed was never overwhelming to the point of abandoning a child several times. I do with the theme of parental expectations had been better explored, but it fell short of its mark.

As for Min-hee, her story with Sang-taek goes only as far as it needs to in order to involved Dae-cheol. It takes on no life of its own. The same holds true for her romance with him. It should be exciting and the kiss between them should be fraught with tension. Neither are. In fact, I was just waiting for them to get it over with. There is no romantic chemistry between Kim Sun-ah and Yoo Sang-wook.

Going into episode 16 feels like a relief that the show is going to be over. I do not anticipate it. I hope it proves me wrong.