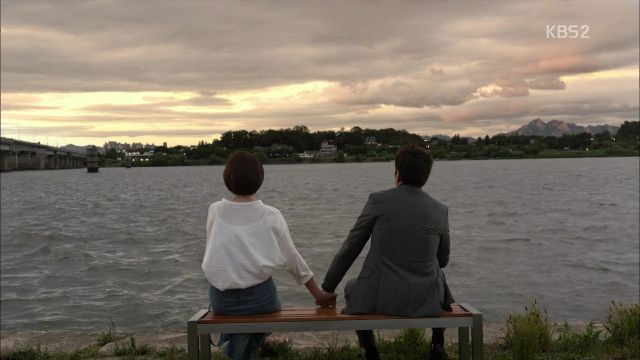 "Masked Prosecutor" has come to an end. It has been quite the journey that concludes pleasantly. Everyone gets what they deserve, including our hero. Justice is had, but what is missing from this show is the feeling of justice and satisfaction.

"Masked Prosecutor" went through the motions of working the law, catching the villains, dealing with impossible family and childhood loves, but that magnetic spark that makes a drama special and attractive to the viewer was missing. Casting was stellar, but the chemistry between the cast members was decidedly lacking. The draw of romance between Min-hee and Dae-cheol was missing; a genuine anguish that stems from desired connection lacked between Sang-taek and Min-hee; the challenge offered by Ri-na as a second lead was non-existent. This is partially lack of chemistry and partially bad planning in terms of writing and production. Most there was a very distinct lack of tension throughout the drama. Moments that were supposed to be suspenseful seemed staged.

As for the plot, everything somehow worked out. Hyun-woong's parents got their just deserts: they lost everything. Sadly, the father jumped off a building, which should've had more impact. Suicide is always tragic and this was quite underplayed. The mother was incorrigible to the end - she used Dae-cheol repeatedly with little to no guilt or remorse. This is a tragic but wonderfully useful character-type that was misused. Some people are unchangeably selfish and she could've been much more deeply explored. I would've loved to have seen how her selfish behavior affected her current family. It's assumed that it molded Hyun-woong, but we didn't see much of it. Assumptions on television are useless unless that add to suspense. These did not.

I must admit that I was most disappointed with Hyun-woong's path. It is suggested that his upbringing is what pushed him in the direction of criminal activity, but we didn't really see it. Eom Ki-joon was fantastic with the material he was given, he cannot be put at fault, but we didn't see his transformation. It just happened and he became cruel and unfeeling. His feelings towards his parents were never really show and only disgust was displayed towards Dae-cheol - nothing else. It's a total waste to do that. His character could've been so layered and complicated, and he wasn't. In the end, he was jailed and given a redemptive act to perform without actually embodying the redemptive qualities of the act.

Nothing truly came full circle except for Dae-cheol. He started off as an aimless kid and his goals were first defined by someone outside him, his father. He then took them on as his own goals, which gradually morphed from revenge into a genuine desire for justice. He had to give up the job that he cared for in order to achieve it - he served jail time for crimes he honestly admitted to. His path came full circle and he was the only character who was able to walk such a path. Joo Sang-wook was as winning as he could be in the role, like Eom Ki-joon. He was good with what little material he was given to work with.

Sang-taek, his daughter, and Min-hee were a strange family trio that was never properly developed. Sang-taek started to take an interesting path when he realized Min-hee was his daughter, but that plot thread, like many others, was left by the wayside. He was predictably killed off and we never got to see Min-hee's reaction nor her sister's towards the death. And what of their relationship afterwards like? That was one of the most beautiful relationships in the drama, Min-hee discovering her sister and growing close to her.

In the end, justice was served, but it didn't really matter. Television shows are created to serve a purpose: entertainment, social commentary, personal reasons. "Masked Prosecutor" had the ability to entertain and make commentary on the justice system, parenting, and personal choices. None of the points were made. Did "Masked Prosecutor" entertain? Yes, on occasion, it did. There were moments of acting brilliance that carried it through. Sadly, it was not much more than the sum of its parts.