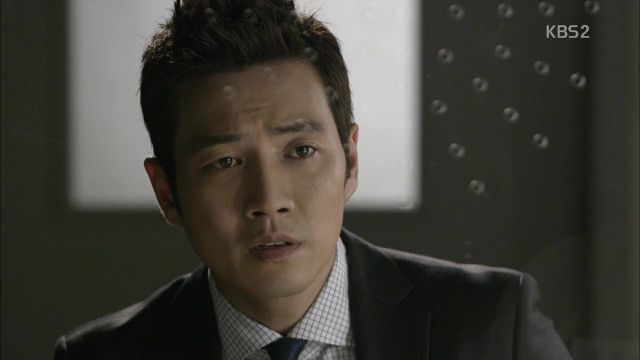 After the midway point of "Masked Prosecutor" Min-hee began to fill out as a character.  In this episode especially she shows significant growth as her past comes to haunt her and she loses the composure for which she has been known. Alongside her walks Dae-cheol and his sidekick Ho-sik propels him into realization: he must use the mask for justice and not for revenge.

I've been hoping to see Dae-cheol to learn to be powerful as a prosecutor, but the show wants him to fight on the side of justice rather than use the mask for personal reasons. This is noble, but there is only so long that he can do it before getting caught. As this is a sixteen (as opposed to a twenty) episode drama it could work if the writer paces it properly. The plot thus far only reaches towards the apprehension of Sang-taek and discovering the truth behind Min-hee's and Dae-cheol's pasts. More than this isn't needed, but the suspense is wearing thin. Yes, Min-hee and Hyun-woong are finally becoming more interesting, but it's as the plot loses steam.

Fortunately this episode in particular focuses on Min-hee and her journey of coming to terms with her parentage and re-focusing her goal in life. Finally we see Kim Sun-ah opening up and giving the audience the emotional depth we are used to seeing from her. It's also the richest that we've seen her character. We learn more about her because of the huge change in events and because that changes brings out an impulsivity in her not previously seen.

As for Hyun-woong, he is becoming more difficult to read as time goes on. The more he becomes entrenched in his father's issues, the harder his visage and persona become. Whereas previously he seemed like a genuine person who didn't want to meddle in the dirtier side of politics, now he does it supposedly without question. It makes him more interesting, but also puts him in danger of becoming unlikeable. Luckily, Uhm Ki-joon plays the paper-thin character with enough nuance to make Hyun-woong feel real.

I'm not sure where this show is going with Ri-na. She seems to be on the side of justice, the side that Dae-cheol needs to come to terms with. She also supports his errands as the masked man. Other than that, she seems to be a waste of a character in that she only appears to further the plot.

Although I'm happy with the character development in Min-hee and Hyun-woong, the rest of the story is sagging. "Masked Prosecutor" needs a little pep in its step or it won't make it to episode 16.

16 episodes - Wed, Thu 22:00
Also known as "The Man in the Mask" and "Masked Investigator"
Synopsis
About a man who uses his hands to handle situations that he normally can't deal with as an investigator.