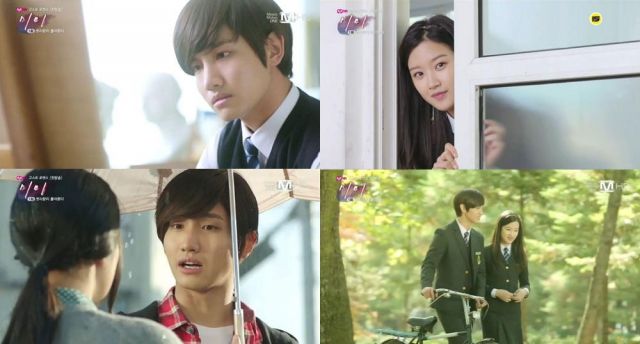 Min-woo (played by Changmin) is a young webtoon artist. That's about as far as I could get in figuring out what this drama is actually about. I mean, yes, literally speaking, this is a love story about Min-woo's high school days, where he met the titular Mimi (played by Moon Ga-young). Almost the entire episode takes place in flashback, at the extremely lonely, empty, clean, and bright school where Min-woo and Mimi first met.

But none of it feels real. I don't mean that the drama feels illegitimate or anything like that. Well, to be honest I'm not terribly thrilled with the acting. Changmin's performance comes off as awkward and stunted, whereas Moon Ga-young is...I don't know, desperate maybe? She goes through this really elaborate role play at one point that seems more pathetic than cute.

What's keeping me from counting "Mimi" out as terrible just yet is that I'm not sure how much of this drama is actually supposed to be plausible or believable. The school feels horribly unearthly, like something out of a dream. And maybe it is out of a dream. We see several events that Min-woo could not have possibly witnessed personally, yet as far as I can tell most of the drama is just Min-woo's flashback. I think. Mimi may or may not be a ghost haunting Min-woo in the present day. And I'm not sure whether she's literally haunting him or metaphorically haunting him either. The context is kind of weird.

Also not helping is the mystical quality of the music. Like the cinematography, sound plays an overwhelming role here, and is a much stronger presence than either the performances or the dialogue. The result is a rather confusing mix of the senses, further heightening the drama's apparent dream-like quality. It's hard to tell what's real and what isn't. Yes I know that a TV drama is by definition imaginary but "Mimi" appears to be deliberately screwing around with these boundaries. The complete lack of any relevant character outside our two leads makes it difficult to quantify this drama in terms of a traditional narrative.

As to whether or not that's a good thing, I have absolutely no idea. "Mimi" hasn't really given us anything to hook on to yet. This could be a confusingly constructed romance. It could be a deliberate takedown of the nostalgia related to first loves and how this relates to the abcess of memory. It could be a story of Min-woo slowly going insane. It could be a combination of all three. As of yet there's just not enough context to make any definitive judgments one way or the other.

"Mimi" is directed by Song Chang-soo, written by Seo Yoo-seon and features Changmin and Moon Ga-young