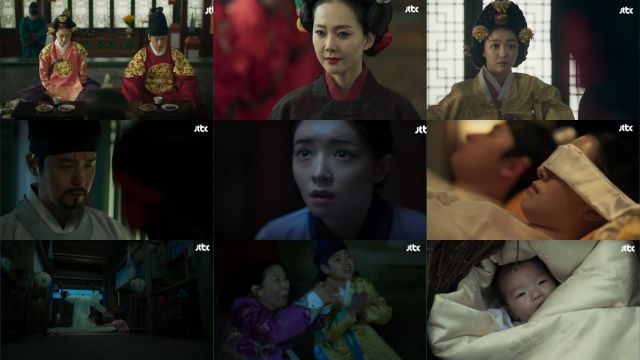 After the dust has settled from a generally disastrous political situation, Queen Sim (played by Jang Hee-jin) ends up having to petition for help from the sorceress Hong-joo (played by Yum Jung-ah). The price of all magical aid ends up falling squarely on the shoulders of Hae-ran (played by Jung In-sun), a willing servant of the Queen. Ultimately, brutal vengeance is promised against those who would use dark powers for the sake of betrayal- with those same dark powers that have left a lasting legacy to Hae-ran.

"Mirror of the Witch" is a supremely dark fairy tale in the tradition of the Brothers Grimm. What makes the tone so effective is that nothing is that over the top. Note that from Hae-ran's perspective all that's happening is a fairly standard, if somewhat creepy form of ritualized surrogacy that would have been considered a perfectly reasonable alternative to having the next King be born of a concubine. It's all politics after all- loyalty trumps biology.

By contrast Queen Sim's decision to cooperate with Hong-joo ends up feeling very...wrong. The visual palette to "Mirror of the Witch" is quite dark, even before the shadow demon shows up. Director Jo Hyeon-tak does good work properly building up the intensity. The magic starts out being subdued, and never really gets much more freaky than spectral levitation. But that's more than enough to get the sense that dark powers are at work and whatever Hong-joo claims the costs are now, they're only going to get higher as time goes on.

It's hard to tell whether Hong-joo or Queen Sim is the worst character. Hong-joo may be the one prompting this evil, but the look in her eyes when Hae-ran unexpectedly manages to fight back indicates that even she may not appreciate the dangerous forces being unleashed. Queen Sim, though, appears to have some sense of moral decency. Yet for all her reluctance by the end of the episode Queen Sim has cooperated in a task even more evil than betraying Hae-ran.

As prequel episodes go "Mirror of the Witch" is quite strong. I especially liked how there's clear logic and definition to the rules involving magic. We don't really know what those rules are and so far we don't really need to. But it will no doubt be quite relevant going forward to know that going forward, brute force is as essential a component in Hong-joo's machinations as the actual wizardry. Just like in any good fairy tale, in "Mirror of the Witch" magic is a metaphor.

"[HanCinema's Drama Review] "Mirror of the Witch" Episode 1"
by HanCinema is licensed under a Creative Commons Attribution-Share Alike 3.0 Unported License.