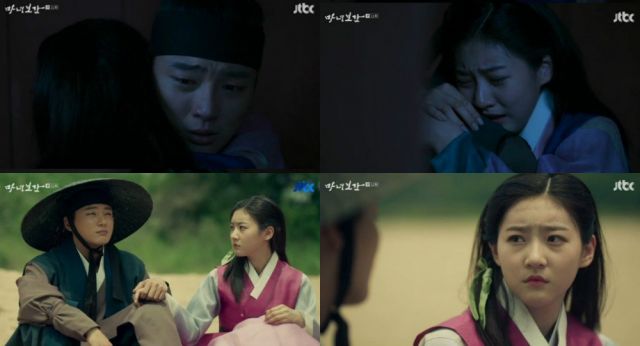 For all the greater logical problems I have with "Mirror of the Witch", Yum Jung-ah's performance is a high point. She consistently and convincingly manages to portray Hong-joo as a woman who can talk her way out of death by swordpoint. It's a bit of a surprise no one has realized yet that it would probably be easier to deal with whatever immediate crisis would be created by Hong-joo's death than it would be to try and solve whatever crisis Hong-joo creates next.

The somewhat amusing flip side of this is that Hong-joo is far less successful when she has the upper hand. What eventually foils Hong-joo's plan is less the efforts of the heroes and more the realization on the part of a rather important character that Hong-joo's plan is kind of evil and maybe he shouldn't be participating. Unluckily for Hong-joo, almost all of her plans require active cooperation from someone not already on her side. And we already know what happens to those people whe Hong-joo has no more use for them.

Speaking of which, Sol-gae's role as a double agent has still not been discovered. How this is even possible? Doesn't Poong-yeon wonder why Sol-gae always seems to be absent at the most critical moments? It seems like at minimum he should recognize her style of swordplay. From a narrative sense it kind of makes sense for Sol-gae to still be out in the open, but that much doesn't fly logically.

...Which always does seem to be the place I end up coming back to. The heroes in "Mirror of the Witch" have frightfully unimpressive deductive powers, mostly because they're really bad at sharing important information. While I can understand keeping Jun out of the loop initially, back when Yo-gwang didn't even know who the guy was, the cumulative effect of all his continued ignorance is that Jun becomes the hero without having the slightest clue what he's supposed to be doing.

From a screenwriting perspective I can understand why writer Yang Hyeok-moon is doing this. The information is not being withheld from Jun so much as it is being withheld from us to create more suspenseful surprises when the relevant information is unveiled. But for me, at least, the main effect of being left in the dark like this on supernatural questions just leads to my asking more mundane ones instead. Like why the King doesn't have a permanent personal guard.

"[HanCinema's Drama Review] "Mirror of the Witch" Episode 11"
by HanCinema is licensed under a Creative Commons Attribution-Share Alike 3.0 Unported License.