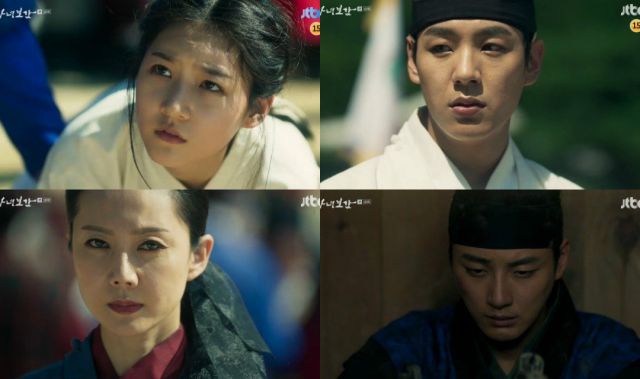 Jun and Yeon-hee briefly have an enjoyable time on the run. Well, all right, being on the run by definition can't really be enjoyable, but they do have some nice flashbacks and even manage to hold hands. Daw. Alas, it doesn't take long for the plot to catch up to them again. Once separated, Yeon-hee completely loses her marbles and goes on a much welcomed rampage. And because there are still two episodes left, Jun has to talk her out of it for some incomprehensible reason.

How many times has someone been right on the cusp of murdering Hong-joo only to back off at the last minute? Half a dozen? A dozen? I can't even keep track anymore. It's hard to believe that way back in the first episode, when Hae-ran's latent powers were unlocked and subsequently used to terrify everyone in the nearby vicinity, that scene was actually visually striking and terrifying. Hong-joo herself looked completely freaked out. Now? It's just business as usual.

Even the drama's imagery, one of its few high points, is frequently used to incomprehensible purpose. The public relations turn against Yeon-hee invokes European witch-hunting imagery, but make no sense in a Korean context. Hong-joo and Hyeon-seo are known magic users. The cliffhanger explicitly involves the use of Hyeon-seo's ancestral fire powers. Why is their magic good and Yeon-hee's magic bad when Yeon-hee saves lives and they just kill people?

Maybe it's because they have access to a printing press and Yeon-hee doesn't. That, among other things, is the only reason I can think of why people aren't horrified that Hong-joo has any influence at all when she was proven to be the sponsor to a serial killer. Incidentally, Seol-gae escaped from jail at some point. I would complain about this except that "Mirror of the Witch" is at the point where off-screen prison breaks are among the less implausible things that happen.

Notice, by the way, how most of the implausibilities I discuss have nothing to do with magic, at least directly. The problems in "Mirror of the Witch" are entirely the result of its characters acting like idiots to pad for time. I can't even feel sorry for Yo-gwang- he was the first person to notice something was wrong with Hyeon-seo but again and again he failed to even warn anybody, let alone try to solve the problem proactively. Whatever Yeon-hee's curse is going to allegedly do, it can't possibly be much worse than what we've already seen.

"[HanCinema's Drama Review] "Mirror of the Witch" Episode 18"
by HanCinema is licensed under a Creative Commons Attribution-Share Alike 3.0 Unported License.