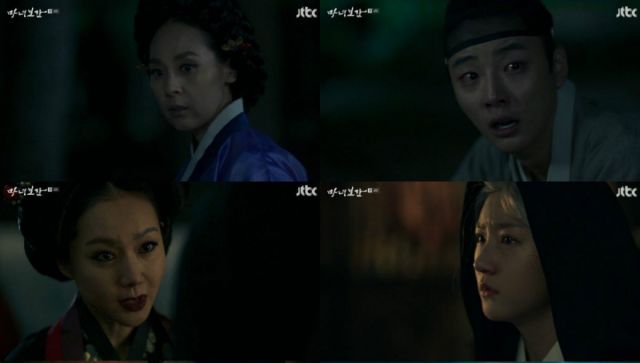 While the production team for "Mirror of the Witch" is steadily taking their time building up all the necessary story elements, the marketing team seems determined to make the pacing seem really slow. The build-up in "Mirror of the Witch" is generally good. The main issue is that when the preview or even basic press descriptions of the drama keep forcefully reminding me of intense action around the corner, it's easy to get impatient.

In all fairness "Mirror of the Witch" does suffer from other generally less defendable aesthetic problems. Jun's relationship with Yeon-hee is comically underdeveloped, and he spends most of this episode trying to protect his mother Kim (played by Kim Hee-jung-II), in a storyline that feels like something out of a completely different drama. This feeling is only accentuated when Jun finally meets Yeon-hee again, and makes a typical bad decision that prioritizes honor over behaving sensibly given the overall situation.

But Kim does play an important overall role in the story when it comes to motherhood. So far Kim is the only character we've seen who is both a good mother and a good person. Every other mother, whether it be Queen Sim, Son (played by Jeon Mi-sun) or Ok (played by Yoon Bok-in) demonstrates a willingness to stoop to brutal, vicious behavior by proxy for the sake of protecting their sons. Their sympathetic motivation does not override the fact that they are willing to assist disreputable people in bloodshed rather than try to find a better resolution.

This much is sad because Hyeon-seo has evidently expended a great deal of effort over the past seventeen years trying to do exactly that, having come very close to this goal only to be undercut by more impatient forces. It should probably be noted that we don't actually know if killing Yeon-hee will solve all these problems. That much was just Hong-joo's interpretation, and to date analysis has not typically been her strongest suit.

I do like Hong-joo's particular brand of evil, though- she's very good with words. Kudos to Yum Jung-ah for making a dark sorceress legitimately scary because she has a power far more dangerous than magic. When Hong-joo speaks, her words cut straight to a person's soul, giving the impression that Hong-joo's ideas are the only ones with any merit, and those who would dare stand for a higher principle than quick fix are fools unworthy of sympathy.

"[HanCinema's Drama Review] "Mirror of the Witch" Episode 4"
by HanCinema is licensed under a Creative Commons Attribution-Share Alike 3.0 Unported License.