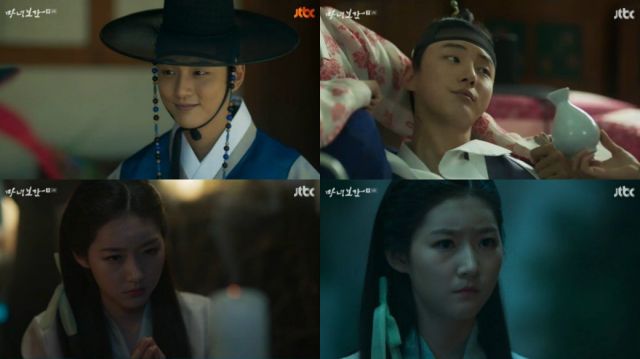 The prologue portion of "Mirror of the Witch" ends in expectedly gruesome fashion. Yes, that's right- apparently the first four and a half episodes were just prologue. I don't think I've ever seen a drama try so hard to undercut its own story before. At the moment it's not terribly clear why we had to spend so much time dealing with character backstory when five years later the leads are all standard archetypes.

To recap- Jun nurses a secret grudge of revenge against elder brother Heo-ok, Yeon-hee is a fully-powered witch who's still trying to decide whether her powers are to be used for good or ill. And then there's King Seonjo (played by Lee Ji-hoon-I), who suffers from horrific physical maladies that in turn are starting to affect his mental condition. Ironically, of the three King Seonjo actually feels like the most important character, because he's the only one dealing with a problem that really needs to be solved right away.

That's my main issue with "Mirror of the Witch" right now. It's making me impatient. Not in the good "what's gonna happen next what's gonna happen next" sense that characterized earlier episodes, but in the bad "it's episode five and we're still somehow not anywhere near the main plot" sense. To give a sense of how bad the pacing is, the preview this episode contains scenes from last episode's preview. And once again, Jun and Yeon-hee manage not to have a conversation even though they're the ostensible lead characters.

I'm possibly being a little harsh. Obviously "Mirror of the Witch" can't run in place forever but the holdup really is frustrating. Take the scene where Jun is reintroduced. It's more typical sneaky rogue stuff, except that since this character trait has already been established, what we're left with is a mostly irrelevant romp where Jun messes around with a couple of temporary villain and ends with a reminder of the generally grim fairy tale world the characters live in.

This is all perfectly in step with the worldbuilding introduced thus far, but at some point a fantasy drama needs more than just worldbuilding to make an impact. Writer Yang Hyeok-moon even manages to lose points on that front because so many of Yeon-hee's scenes manage to invoke Frozen for no particularly good reason. Even so, Kim Sae-ron remains compelling, and her main post-timeskip scene has some legitimately good laughs, so I'm not counting "Mirror of the Witch" out just yet.

"[HanCinema's Drama Review] "Mirror of the Witch" Episode 5"
by HanCinema is licensed under a Creative Commons Attribution-Share Alike 3.0 Unported License.