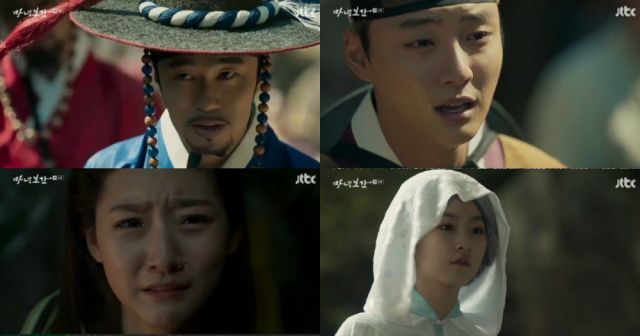 Soon-deuk-i (played by Min Dohee) is, for this episode anyway, the main character of "Mirror of the Witch". She's a schemer who, in between schemes, is friend to gisaeng Man-weol (played by Lee Cho-hee), who is being stymied in her romantic efforts by a disfigured face. You might be wondering what any of this has to do with Jun's revenge plan, Yeon-hee's seclusion, Hong-joo's dark magic, or King Seonjo's physical malady. There are relating plot threads. Unfortunately they aren't very convincing ones.

Mostly this is because the plot isn't actually going anywhere. You could have skipped the first five episodes of "Mirror of the Witch", started with this one, and you would know just as much about what's happening as I do. Most of the backstory simply doesn't even matter. Jun acts less like a man determined to avenge the death of his mother and more like an undercover police officer. Heo-ok, too, mostly just comes off as a corrupt aristocrat with disproportionate political power.

...And that's another problem. Why is there no connection between the villains? Back when "Mirror of the Witch" started off Hong-joo was evil because she was willing to do evil things for political power. Last episode Hong-joo gave up that power in the name of self-preservation. Which leads into another problem. While messing around with souls, resurrection and dark mist is obviously bad, Hong-joo at this point is mainly engaged in preemptive self-defense.

While it's bad enough that "Mirror of the Witch" has plot holes, the fact that they could very easily be fixed is what's really irritating. It's not clear to me why Hong-joo needed to have a falling out with Queen Sim at all. An actual conspiracy between Hong-joo and the upper echelons of society would have made for a much more convincing and intimidating villain than just having Jun fall victim to bad comic book logic.

I mean really, is it so much to ask that character destiny have some relationship to foreseeable consequences? When Jun finally meets Yeon-hee again, it's because he rather stupidly and comically gets smacked in the head by a tree branch in a scene more befitting of vaudeville than serious drama. The production team really needs to pick a tone and just stick with it. In its best moments "Mirror of the Witch" can be a lot of fun, but the low end is simply embarrassing to watch.

"[HanCinema's Drama Review] "Mirror of the Witch" Episode 6"
by HanCinema is licensed under a Creative Commons Attribution-Share Alike 3.0 Unported License.