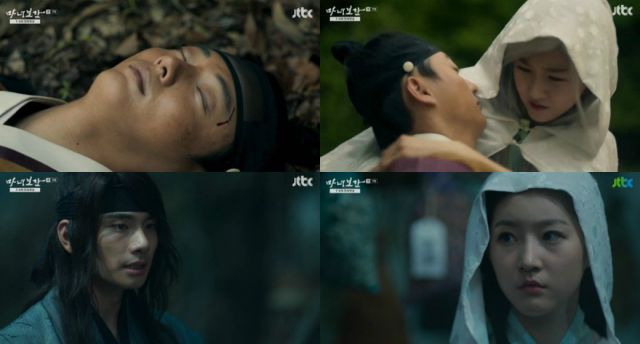 The reunion between Jun and Seo-ri is pretty prickly, as usual because "Mirror of the Witch" insists on restarting the plot from scratch for no reason. Fortunately in this case the dynamic is fairly interesting. We see clearly that Seo-ri and especially Yo-gwang (played by Lee Yi-kyung) are just about completely out of patience, and only bothered to save Jun's life in the first place because they are that desperate for useful information.

While bad information management has been the big frustrating point of "Mirror of the Witch" to date, it's actually fairly well utilized here in story. Take King Seonjo. He's not really cut out to be king- the guy is only at the bare minimum competence level. But the situation is only made worse by the fact that other characters won't give him the full story on what's going on, forcing King Seonjo to make important decisions on very slight information. It's actually a pretty apt analogy to King Seonjo's more famous leadership failures during the Japanese Invasion.

Other characters also benefit a fair bit from being out of the loop. Heo-ok is, for now, less a serious villain and more just a cog in a very inefficient bureaucratic machine that is very bad at solving problems. Detective Heo-ok obviously has no idea how to properly interrogate a suspect. Here's a hint- if you want actual useful information, positive bargaining tends to be a better strategy than just making threats at random.

This also does a lot to emphasize Hong-joo's rule as the true villain and how, once again, her main useful ability is persuasive arguments rather than magic persay. I'd like to mention, by the way, that her squad of female goons is pretty cool. South Korea is probably one of the best countries to work as a stuntwoman in general, because it seems like every other historical drama has at least one all-woman army.

So overall "Mirror of the Witch" is back to the good stuff- more emphasis on character flaws, less on convoluted plots. The production values are pretty decent overall too. Take a gander at Yeon-hee's hideaway and observe just how cool it looks. I wonder where that set is located, and if it involves a real tree. Other more humorous elements are also quite well-done. The brief obsession over Yoon Si-yoon's bare chest may feel completely out of place, but it has just barely enough  relevance to still be pretty funny.

"[HanCinema's Drama Review] "Mirror of the Witch" Episode 7"
by HanCinema is licensed under a Creative Commons Attribution-Share Alike 3.0 Unported License.