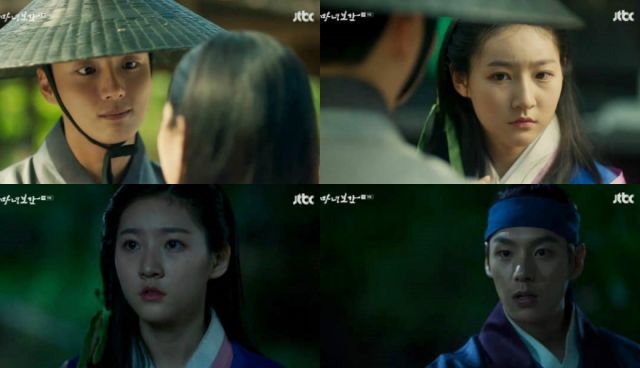 A trip into backstory only serves to further convince me that writer Yang Hyeok-moon is obsessed with backstory to the point of almost completely forgetting that "Mirror of the Witch" even has a present ongoing story in the first place. If I try to look at the drama's plot in terms of a complicated interconnected tapestry, it kind of makes sense. If I try to answer basic questions like "what does character X want to do right now to further his or her goals" I'm at a complete loss as to what's going on.

The only place where this manages to work is with Hong-joo in the palace storyline. Because there, of course her methods and motivation are shrouded in mystery. That's the whole point. Hong-joo's ability to restrict knowledge is her main useful ability. It also greatly contributes to the spooky atmosphere of the poorly lit palace halls, which at times makes "Mirror of the Witch" seem like a cross between a Shakespearean tragedy and a gothic horror movie.

Then we get back to Jun, and his scenes are like a mix between the Three Stooges and R.L. Stine. The funny thing is there's not actually that much tonal dissonance because the palace story and Jun's adventures are so far removed from each other that they feel like two completely dramas. Consider how long the main characters and the main villain have gone without actually meeting each other.

It's surprisingly difficult to come up with that much anyone actually does in "Mirror of the Witch". And when characters do act, they tend to be repetitive. Heok-ok continues to prove that he's a generally incompetent investigator- the kind who thinks he can squeeze blood from a turnip. If he wasn't such a jerk I'd almost feel sorry for him. As it stands, Heo-ok is on track to somehow receive comeuppance from his own imbecility.

"Mirror of the Witch" irritates me in that while I can kind of see the logic behind the drama in broad perspective, lately there's never been any particularly compelling reason to watch the drama right now. On the rare occasion there's any immediate danger the solution is either quickly glossed over or explained later on in flashback, by which point I'd completely forgotten about those questions I'd had several episodes ago. The overall process of watching this drama tends to be exhausting as a result. Not to mention boring.

"[HanCinema's Drama Review] "Mirror of the Witch" Episode 9"
by HanCinema is licensed under a Creative Commons Attribution-Share Alike 3.0 Unported License.