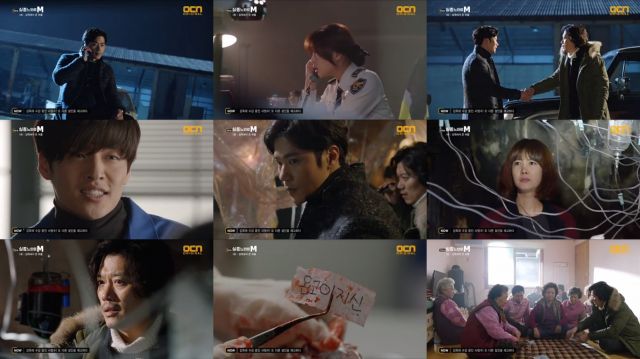 Soo-hyeon (played by Kim Kang-woo) is a US-trained investigator who's very good at math puzzles. Dae-yeong (played by Park Hee-son) is a mostly standard grizzled street cop. Together they...well, they solve mysteries more than they fight crime. The whole reason Soo-hyeon's been dragged out to the field in the first place is because he's implicated in a bizarre crime. The perpetrator of these criminal actions (played by Kang Ha-neul) is apparently interested in matching wits with Soo-hyeon. I guess because in prison he has nothing better to do.

Worry not- while the set-up gives the impression of the standard master criminal playing around with the hapless detectives by the end of the episode we find out that there was an actual point to all these number puzzles, and that Soo-hyeon hasn't been wasting his time. What's more, the hook for the next episode is actually a pretty good one. Now that Soo-hyeon and friends have unraveled the basic explanation, it's time to get into the more grisly stuff.

In the present context, though, this episode is...hmmm...I'd definitely say above average to be sure. "Missing Noir M" benefits a lot just from having everything about its premise so quickly and easily defined. Soo-hyeon and Dae-yeong have exactly one misunderstanding that's quickly cleared up, and from that point on the two function as a pretty professional unit. They're working together to solve a crime, not get wrapped up in personal drama.

The trouble with having characters act like mature adults, though, is that mature adults tend not to be all that interesting from a dramatic point of view. And while director Lee Seung-young does his best with Dutch angles, the visuals in "Missing Noir M" aren't really all that interesting. The main exception naturally being the crime scenes and the numerology- although that's really more to the credit of writer Lee Yu-jin for coming up with those ideas in the first place.

While nothing about "Missing Noir M" is immediately impressive, all-around the production is a fairly strong one. It has something that's been lacking in a lot of detective procedurals lately- a well-crafted mystery that's actually solvable by the viewer in advance. Although you'll have to know a lot about numbers. While I don't have any especially high praise for the drama just yet this first episode is quite promising and I'm looking forward to seeing how this storyline will wrap up.