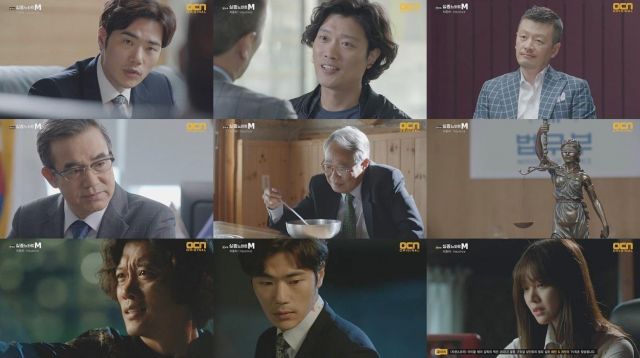 First, just to make it totally clear, the final case of "Missing Noir M" is just another one-off case. We get some details regarding Soo-hyeon's backstory, but it's made quite clear that we're only getting all the answers if "Missing Noir M" is renewed for a second season. I'm not sure that's happening- to be honest I'm not sure I want it to happen, because while "Missing Noir M" has certainly had its strong points, right to the end the drama seems determined to make things as depressing as possible.

It's a bit of a disappointment, because until the final act the case is actually reasonably compelling. It's an unusually generic case, that requires all three team members use their skills in roughly equal fasion. Dae-yeong uses on-the-ground canvassing to unlock the direction the clues they need to move forward, Seo-joon comes up with the more elaborate schemes necessary to come up with more elaborate information, and Soo-hyeon interprets the data so they know where to go next.

Part of this is probably still just "The Girl Who Sees Smells" aftershock, but I really do appreciate a well-crafted mystery where a professional criminal actually acts like a guy who knows how to avoid getting caught and holding up enough plausible deniability that we're not totally sure a last-minute plot twist won't pop up out of nowhere. Everything makes sense here, and is well-telegraphed. Except for the final twist which is just...

It's depressing. There's no getting around that. It's depressing and honestly kind of spiteful. If this is the only season of "Missing Noir M" we end up getting I can't help but be annoyed at writer Lee Yu-jin for choosing to end it on that note. Now, in all fairness, the Western stories from which "Missing Noir M" takes its inspiration use the same trope with some regularity. It's not exactly unprecedented, and if nothing else "Missing Noir M" hardly misled us on that point. The title itself is a pretty gloomy one.

For me personally the issue is that I've drifted away from American media to the Korean stuff in large part because the former has taken to being disturbingly grim in recent years, even with obviously childish products like superhero franchises. I can take some depression in my police procedurals, but "Missing Noir M" really has been just a tad much in that department. Well, I liked the multi-part episodes at least. And even if the ending was on a sour note, overall "Missing Noir M" has been a strong production. But it is unavoidably one that's filtered on lines of personal taste.