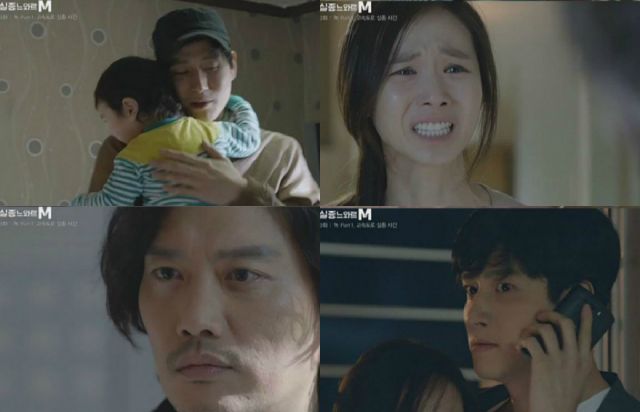 No murders this time as "Missing Noir M" moves into its second case. Now, see, this is what I like about the writing in this drama. Lee Yu-jin shows excellent restraint in just making the crisis about a missing person without having to drag increasingly outrageous crimes into the equation. Certainly the set-up is intriguing enough- an abandoned car, obvious signs of furtive activity, and it all ties back to...an apparently unremarkable married salaryman?

The mystery is nonetheless solvable. Actually to date this is an even better set-up than what we had for the first episode of "Missing Noir M", because there's no convoluted numerology puzzles. Dae-yeong does investigative legwork to clear up the basic facts. Soo-hyeon makes logical deductions based on this information to ascertain what's really going on in the case. Seo-joon...definitely has the least obviously important role. That's probably because to date "Missing Noir M" only occasionally needs her computer skills.

This isn't necessarily a big problem, it's just sort of odd considering the way that Jo Bo-ah is clearly billed as a central lead character. In the first storyline especially, she didn't really have that much more screentime than Park So-hyun. Their roles are actually quite similar actually. Seo-joon is only required for computer stuff, and Joo-yeong is only required for dissecting corpses. These are specialized tasks that are difficult to fit into a standard mystery narrative.

Let's get back to that actually. "Missing Noir M" is excellent genre fiction simply because the clues are so very well-paced. Frequently the detectives ask important questions either shortly before or after I do do myself. This makes it very easy to stay engaged with the story, and I'm still left guessing as to how the next episode will conclude the story. It seems like we know the basics of what's going on, and yet there's obviously some ominous layer that will put the crimes committed here in broader perspective.

The main obvious question right now is whether this story will follow the same trend of the last one, and present us with a character who has sympathetic motives. At the very least it's clear that this is a person with rather detailed knowledge of the ongoing situation- much more than any general bystander should really have. Could this case, too, just be another rather elaborate game in which the police are considered the important players..? I have no idea. But I look forward to finding out.