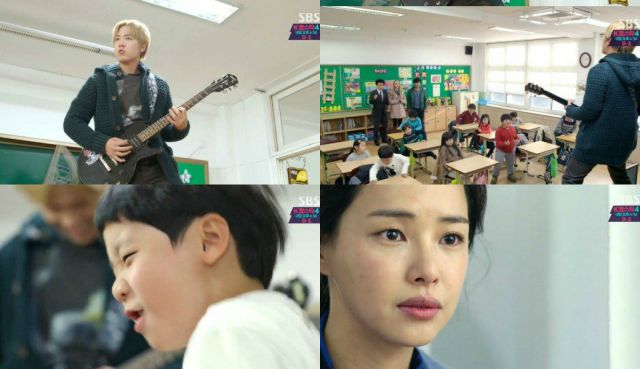 By this point "Modern Farmer" has picked up about a dozen subplots that I can see, and this episode helpfully adds even more. I'm not complaining, exactly, since none of these stories are all that bad. It just gets kind of awkward having the drama so crammed full of plots that some of them get at most one short scene of exposition. We never do find out how Gi-joon got out of the closet. Seemed like a wasted opportunity for a joke, personally.

Speaking of jokes, the best one this time around is Sang-dook's crazy new idea for a fusion drink that's probably never actually going to catch on. I did find myself wondering what it would taste like, but I'm not about to try that myself. Besides, the presence of the object in "Modern Farmer" isn't a commentary on new beverage choices. Rather, it's an exploration of how Sang-dook both is and isn't really appropriate stepfather material.

This is most explicitly delineated in the whole parents' day sequence, where the only parents we see are of the nontraditional sort. Which is kind of funny to take in- in the West, at least, such situations these days tend to be seen as an assault on non-traditional families. Here, though, the kids are more agitated at a presentation that's not fun than they are at who the people actually participating are. And for the record, even if Min-gi is technically a professional, he probably shouldn't have gotten away with that.

Logistics also plays a major part in the episode, with multiple revelations of people planning to either leave or entering the town becoming significant plot points. There's also a patently bizarre coincidence that leads to exposition of one character's tragic backstory. A tragic backstory I honestly could have done without, since it clashes pretty bad with the drama's generally goofy tone. Especially considering the character in question is mostly just a one-note joke.

Going by the preview it looks like "Modern Farmer" is planning to transition into more serious material. I'm not sure what to think about this just yet. By and large the weakest moments have been when the direction is trying too hard for pathos. It's the subtle moments that are most worrying, like the obvious stress characters go through when forced to think about difficult filial and romantic relationships. Still, this episode was a decent one, continuing the drama's general strength.